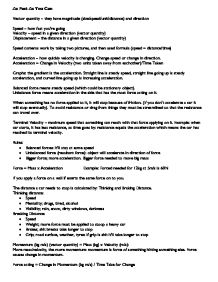 As Fast As You Can

Vector quantity – they have magnitude (size/speed/unit/distance) and direction

Velocity – speed in a given direction (vector quantity)

Displacement – the distance in a given direction (vector quantity)

Acceleration – how quickly velocity is changing. Change speed or change in direction.

Balanced force means steady speed (which could be stationary object).

Unbalance force means acceleration in the side that has the most force acting on it.

When something has no force applied to it, it will stop because of friction. (If you don’t accelerate a car it will stop eventually). To avoid resistance or drag from things they must be streamlined so that the resistance can travel over.

Terminal Velocity – maximum speed that something can reach with that force applying on it. Example: when car starts, it has less resistance, as time goes by: resistance equals the acceleration which means the car has reached its terminal velocity.

If you apply a force on a wall if exerts the same force on to you.

The distance a car needs to stop is calculated by: Thinking and Braking Distance.

More mass/velocity, the more momentum: momentum is force of something hitting something else. Force causes change in momentum.

Cars are designed to slow people down over a longer time when they crash (longer for change in momentum):

Background radiation is all around us from:

Background radiation can change depending where you are:

Atoms: nucleus has most of the mass (still tiny) and protons and neutrons

Gamma waves have no charge

Isotopes – different forms of same element (different amount of neutrons), only a few stable ones. Unstable ones decay into other elements (and give out radiation on the way)

You can tell when the unstable isotope atoms will decay, it’s random. Nothing affects decay.

Half-life is the time taken for half of the reactive atoms to decay. Can’t do full because it takes too long.

If half life falls quickly it has short half-life.

This shows it has two half-lives in hour, so 1 half life is 30mins

Half-life graphs always go down in a curve. G-M tube and counters are used to measure half life over time (multiple readings).

You need to take away background radiation from every reading.

Knowing half life and how much radioactive isotope left in specimen you can work out how long it’s been around.

Carbon dating is uncertain because:

Static electricity is caused by friction: when two insulating materials rub eachother; electrons will scrap off one and go to another. This leaves a + and – on each one.

Positive charges can not move. They are created by electron going elsewhere.

When synthetic clothes are dragged over eachother, they static charges on both parts which causes a attraction. Sparks occur when they rearrange themselves. Also happen with car seats but shock happens when you touch metal outside.

Lighting – rain drops and ice bump together which knocks of electrons. The electrons go to the bottom and then they build up and a huge voltage is given off.

Aircraft Fuelling: when planes are being fuelled, the fuel gains a – charge from the pipe and the pipe gets + charge which could explode. You have to attracted metal strap so the electrons are conducted away.