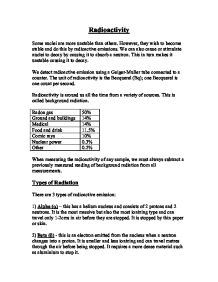 Some nuclei are more unstable than others. However, they wish to become stable and do this by radioactive emissions. We can also cause or stimulate nuclei to decay by causing it to absorb a neutron. This in turn makes it unstable causing it to decay.

We detect radioactive emission using a Geiger-Muller tube connected to a counter. The unit of radioactivity is the Becquerel (Bq); one Becquerel is one count per second.

Radioactivity is around us all the time from a variety of sources. This is called background radiation.

When measuring the radioactivity of any sample, we must always subtract a previously measured reading of background radiation from all measurements.

There are 3 types of radioactive emission:

1) Alpha (α) – this has a helium nucleus and consists of 2 protons and 2 neutrons. It is the most massive but also the most ionizing type and can travel only 1-2cms in air before they are stopped. It is stopped by thin paper or skin.

2) Beta (β) - this is an electron emitted from the nucleus when a neutron changes into a proton.

The Health Hazards of Ionising Radiation

In industrial processes, raw materials and fuel are stored in large tanks or hoppers. Radioactive isotopes are used to gauge, or measure, how much material there is in a storage vessel.

This method of gauging has several advantages over other methods. There is no contact with the material being gauged. Also, coal dust might cause false readings with an optical gauging system. Coal dust is much less dense than coal so the gamma ray system still works properly.

Tracing and measuring the flow of liquids and gases

Radioisotopes are used to track the flow of liquids in industrial processes. Very tiny amounts of radiation can easily be detected. Complex piping systems, heat exchangers in power stations, can be monitored for leaks. Radioactive tracers are even used to measure the rate or dispersal of sewage.

*** A fairly clear set of revision notes on the topic of nuclear radiation. The addition of slightly more information in certain sections would help to clarify the ideas being listed.
More clearly labeled diagrams or tables would help the reader absorb the information being described.