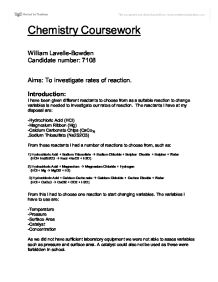 Aims: To investigate rates of reaction.

Introduction:
I have been given different reactants to choose from as a suitable reaction to change variables is needed to investigate our rates of reaction.  The reactants I have at my disposal are:

From these reactants I had a number of reactions to choose from, such as:


From this I had to choose one reaction to start changing variables. The variables I have to use are:

As we did not have sufficient laboratory equipment we were not able to asses variables such as pressure and surface area. A catalyst could also not be used as these were forbidden in school.

Deciding which reactants to use

For the second experiment I made a sodium thiosulphate solution, by placing sodium thiosulphate crystals into a beaker with a measured amount of water in it. This created for example a 0.5m solution of sodium thiosulphate. After this we placed the solution on to a white tile with a black cross marked on it in the centre so we could see it clearly looking from a birds-eye view over the beaker. The final part to this experiment was placing 20ml of hydrochloric acid into the beaker and timing how long it was until the solution became to cloudy to see the cross through. This was then repeated 3 times and an average was taken for each concentration we tested.

For the third experiment I decided to use the simplest way of collecting gas from a reaction – Downward Displacement. The reactants I used were hydrochloric acid and magnesium ribbon, I was looking for how much hydrogen gas was given off and how long it took. The equipment I used were as follows:

This process works by gas from the reactants collecting in the conical flask, pushing water into the trough – Downwards Displacement.
Firstly the water trough is filled with water, after this we placed the measuring cylinder in the trough completely filling it with water, and then flipped it over so no air was in the cylinder. To secure it in this position we clamped it. We then slipped the delivery tube into the cylinder with someone on the other end ready to place it over the test tube. This person placed 20 ml of hydrochloric acid into the test tube to react with the 2g of magnesium. Immediately after this is done the rubber stopper is placed over the test tube securely.

Deciding which method to use

I will use cross and tile method because I feel it is quite simple practically so allows reliable data to be collected as there is less room for error. In my prelim work I investigated changing the concentration and the temperature of the sodium thiosulphate. I found that changing the concentration gave me more reliable results so I think I will investigate this variable. I realised that this method is not perfect and I need to consider all the improvements I can make to control variables such as room temperature, timing, observing, measuring of volume etc.

Deciding which variable to use

For the second experiment I made a sodium thiosulphate solution, by placing sodium thiosulphate crystals into a beaker with a measured amount of water in it. This created for example a 0.5m solution of sodium thiosulphate. After this we placed the solution on to a white tile with a black cross marked on it in the centre so we could see it clearly looking from a birds-eye view over the beaker. The final part to this experiment was placing 20ml of hydrochloric acid into the beaker and timing how long it was until the solution became to cloudy to see the cross through. This was then repeated 3 times and an average was took for each concentration we tested.
This is the experiment I finally decided to use. There were only a couple of improvements I could think of to improve on this experiment. One idea I had that would improve the experiment was placing cling film over the black cross on the white tile; this would reduce tampering with the cross which ultimately would affect the visibility through the sodium thiosulphate solution changing the time. Another way I could have improved this experiment was by getting hold of a more accurate mass balance, as the one I had been using was only to one decimal place and also flickered making the concentration of the solution less accurate than it should have been. The final improvement I could think have came towards the end of my testing and this was a method of making the concentration of the three repeats of my testing more accurate. This method is to instead of measuring three solutions of the same concentration separately, use three times the amount of hydrochloric acid (HCL) and three times three weight of sodium thiosulphate (Na2S2O3). Once this solution had been mixed so no crystals were left it was divided into three separate beakers using a measuring cylinder. Although this method of improvement would not make the lack of accuracy from the mass balance any better it would ensure each beaker has exactly the same concentration in it.

Variables I need to control and how I will do this

The variable I decided to change was the concentration of the sodium thiosulphate solution. I did this by measuring out as accurately as possible the weight of sodium thiosulphate crystals and making sure none were lost from the mass balance to the beaker of water they were placed in to create the solution. I only had one problem with controlling my variable, this was the accuracy of the mass balance and how it went to only one decimal place.Apart from this I had no problem controlling the variable to an accurate measure. In my experiment I avoided using one method to increase the accuracy of the sodium thiosulphate solution; this was using mortar and pestle. Although this increased the time it took for the solution to be made it decreased the accuracy of the concentration substantially as lots of the crystals when being crushed could be lost and become stuck to or left in either the mortar or pestle.

Why I chose my range

I needed to select a variable which would allow me to collect a wide range of data. I felt that after testing how temperature affected the reaction this was a really difficult variable to control and difficult to accurately keep the solutions at specific temperatures. So instead I wanted to choose a variable that would provide data that was accurate as well as reliable and allow me to collect a good range. I chose concentration because it allows me to investigate any concentration and therefore there is no limit to my range. I have chosen to investigate from 0.125 M up to 2 M at regular interval testing so it would be easier to assess if there are any proportional patterns.

I measured out 20ml of hydrochloric with a concentration of 1 M using a measuring cylinder and poured it into a conical flask and placed it on a white tile which I had drawn a black cross onto. I measured out 20 ml of sodium thiosulphate solution with a concentration of 1 M. I made different concentrations of this solutions by dissolving the solute in the solvent water.  (I will explain this further below). I added the 20ml of sodium thiosulphate to the conical flask as the last drop went in started a stop clock. I recorded the time to two decimal places it took until I could not see the black cross on the white tile because of the yellow sulphur which was being produced. I repeated this experiment two more times and if I felt there was an outlier then I did a fourth test.

To make a 1 M solution of sodium thiosulphate

248g dissolved in one litre of water equals 1 M solution

My second graph shows the range of values I got at each concentration. Therefore the relationship and trends are the same as explained for graph one but the reliability of the results can be considered because of the range bars. My most unreliable results seem to be at the lower concentrations e.g. 0.25 M and 0.5 M and the results increasing reliability as the concentration decreases. However in my evaluation I will calculate the percentage error which may make more or less confident about this statement. There are no obvious outliers in terms of accuracy of the results and how close they lie  to the curve of best fit but it needs to be noted that I have hand drawn a curve and so decide the placement of it.

My final graph shows concentration plotted against the rate of the reaction. I calculated the rate by using the reciprocal of the average time. The line of best fit is a straight line showing a positive correlation as concentration increases the does the rate of the reaction. A straight line would also suggest there is proportionality between these two variables so I can look for some patterns. At 1 M the rate of reaction is 0.1076 (s-1) so I would predict at 2 M it would be 0.2152 (s-1) and by actual value is 0.1965 (s-1) which is fairly close. Obviously I van not be confident about saying there is a doubling trebling pattern with confidence because I have only tested a limited range and done three repeats.