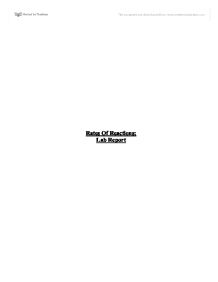 Thirty seconds later the second reading was taken, and a minute later the final reading was taken down. This was repeated with a fresh solution of Hydrochloric acid, and another 1.20 grams of Calcium Carbonate marbles. Then, 1.20 grams of Calcium Carbonate powder was weighed out, and when it was added to another prepared solution of Hydrochloric acid the timer was started and the initial reading made. Again, after thirty seconds the second reading was taken and the final reading after a minute, This was again repeated with a fresh solution and another 1.20 grams. The word and chemical equations are as follows: Calcium Carbonate + Hydrochloric Acid -> Carbon Dioxide + Calcium Chloride +Water CaCO3+ 2HCl -> CO2 + CaCl2 + H2O Results: Mass (g) ...read more.

Evaluation: This experiment was a hard one to do without errors. In the first instance I was going to react HCl with Mg, but as the teacher pointed out Hydrogen is a very light gas and so was liable to give me no result at all. My main sources if error were: -Timing- I should have done the timing closer together (checked the mass every 10 seconds, for instance. Next time I would do this as it gives more results and so a more accurate and detailed graph. -Weight measurements- I found weighing exactly 1.20 grams of Calcium Carbonate was extremely difficult, and I think for a few tests it may have been quite inaccurate. Next time I would be much more careful and precise with regards to the weighing. I did proceed with some safety measures: a Lab Coat was worn the whole time and goggles were used. ...read more.

In this essay, the student presents the write-up of an experiment into rates of reaction in a clear, logical order. A good level of understanding is demonstrated, with key terms being explained such as what the independant and dependant variables ...

In this essay, the student presents the write-up of an experiment into rates of reaction in a clear, logical order. A good level of understanding is demonstrated, with key terms being explained such as what the independant and dependant variables are. The candidate begins with a solid hypothesis to investigate and ends with a conclusion to analysise the results, in which there are comments on whether the original idea was correct or not. This is important as, even if your hypothesis was wrong, it indicates you can, not only, correctly carry out an experiment but also identify what the results show.

As already mentioned, this student set out with a clear aim for the task. They carried out the investigation to the level of detail expected at GCSE level, with a written explanation of the method and all the background formulae. The conclusion is logical based on the evidence and the student does a good job of summing up the results of the experiment, however, and improvement would be to also add some information on why these results occurred as opposed to linking to a website with an explanation. In general though, the candidate displayed strong understanding as well as additional skills such as drawing the diagrams and graphs which is very important for scientific subjects. There is a good discussion on errors that could have been made, although this could have been expanded on a little. It is important to understand errors in experiments as they can have a huge bearing on the results and a more insightful analysis of this could have really made the essay stand out.

The investigation is easy to follow because of the precise use of language and the fact that there are little-to-no grammatical or spelling errors; technical terms are also used when necessary. A good feature is the use of subtitles for each paragraph as they make the logical progression of the task clear to see. It makes life of the examiner a lot easier too, as it immediately shows that the student knows what the subject well and has hit all the assessment objectives. One criticism that could be made is that, perhaps, the student has stuck to the structure too rigidly and shows a lack of creativity, but at GCSE level, this is unlikely to be marked down at all, especially in a scientific subject.