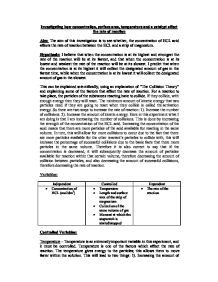 Temperature is one of the factors which affect the rate of reaction. The temperature gives energy to the particles; this allows them to move faster within the solution. This will lead to two things: 1). Increasing the amount of collisions. 2). A greater percentage of successful collisions. Here as the particles are moving faster, they are going to hit more particles in a faster time, this will also lead to an increase in percentage of successful collisions as there are more collisions occurring. Secondly, it would increase the percentage of successful collisions by giving the particles more energy, this would mean that it is likely that any collision would be successful because the particle would most likely have a greater energy than the activation energy. So the reason we would control this variable is to ensure that in all the experiments, the particles would have the same energy available for reaction, and that no experiments would have an advantage over another experiment. We controlled this variable by carrying out all the experiments in the same room and on the same day. This controlled the temperature because the temperature in the room was constant, and if it varied, it only varied by one or two degrees, this wouldn't have any effect on the particles in the experiment. Keeping all the experiments on the same day ensured that the general temperature of the atmosphere stayed the same, thus not inhibiting or enhancing any experiment. It also ensures that the rate of reaction is only dependant on one thing and that is the concentration of the acid. Volume of gas collected - It is important to keep the same amount of gas collected for one reason, there can only be one input variable in this experiment and that is the concentration of the acid. So the amount of gas collected must be kept the same, also as the point of the experiments is to measure the rate of reaction, the gas collected must stay the same in ...read more.