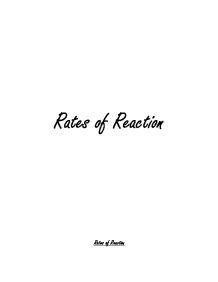 This result could have occurred because of negligence. To increase accuracy I could do the experiment a few more times and find the average of the results. To make my experiment even more accurate and efficient I can also change the equipment I used. This will give me measurements that are more accurate. Some of the equipment that I could have used includes: * Accurate scales that measures to more decimal places then the one I used * Stop watch with alarm as the experiment may be stopped few seconds late The reliability of evidence for my work is very valid and I believe it is sufficient to support my conclusion. The preliminary test gave me valuable information about the experiment as it helped me decide which of catalyst to use. Also it helped me decide on the amount of catalyst. If I were to do this experiment again I will have to have more than one person checking each measurement to make it as accurate as possible. I also can do the experiment a number of times resulting in results that are closer together. Then I would use only the concordant results to find the average, which would be more accurate. If I could take this investigation further it would be to investigate temperature and how if effects the rate of reaction. I could do this experiment by having a reaction happening at different temperatures and compare the rates of reaction. ...read more.

***
This is fairly basic investigation into the affect of concentration on rate of reaction. It is clear with some good diagrams used to support. It does however need to be written in more depth and the lack of experimental data limits its reliability. Improvements have been suggested throughout.