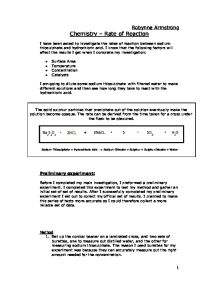 Rates of reaction between Sodium Thiosulphate and Hydrochloric Acid

Robynne Armstrong Chemistry - Rate of Reaction I have been asked to investigate the rates of reaction between sodium thiosulphate and hydrochloric acid. I know that the following factors will affect the results I get when I complete my investigation: * Surface Area * Temperature * Concentration * Catalysts I am going to dilute some sodium thiosulphate with filtered water to make different solutions and then see how long they take to react with the hydrochloric acid. The solid sulphur particles that precipitate out of the solution eventually make the solution become opaque. The rate can be derived from the time taken for a cross under the flask to be obscured. Sodium Thiosulphate + Hydrochloric Acid -> Sodium Chloride + Sulphur + Sulphur Dioxide + Water Preliminary experiment: Before I completed my main investigation, I preformed a preliminary experiment. ...read more.

Concentration Sodium Thiosulphate Distilled Water 1M 25ML 0ML 0.8M 20ML 5ML 0.6M 15ML 10ML 0.4M 10ML 15ML 0.2M 5ML 20ML 3. Measure out 5ML of hydrochloric acid, using a pipette. 4. Start the timer at the same time as you squeeze the Acid into the sodium thiosulphate (and distilled water), then swirl it once, and place the beaker back onto the laminated cross. 5. The solution should start to turn cloudy, and stop the timer as soon as you can no longer see the cross underneath the bottom of the beaker. 6. Wash the equipment and dry as much as possible, re-measure the sodium thiosulphate and water, and start the experiment again, either repeating the same concentration, or doing another. ...read more.

The 0.02M concentration was a lot more inaccurate because a slight error in measurements or equipment would have a greater effect on the results, because the Sodium Thiosulphate has been diluted to a greater extent, reducing the amount of molecules. Evaluation We collected three sets of data, enough for a relatively approximate average, with enough time and equipment for a fourth experiment for any outliers. As you can see in the results they were fairly accurate because the fourth column wasn't needed for any extra data. Most of our results fit a similar pattern, with small error bars, apart from the third experiment on 0.02M, which was based on an unknown error, and it should have probably been repeated. The error could have been caused by a varied surface area or temperature. It could also be based on inaccurate measurements, affecting the concentration levels. 1 ...read more.