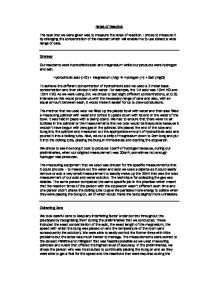 Rates of Reaction The task that we were given was to measure the rates of reaction. I chose to measure it by changing the concentration of the reactant which will enable me to use collect a wide range of data. Strategy Our reactants were hydrochloric acid and magnesium whilst our products were hydrogen and salt. Hydrochloric acid (HCl) + Magnesium (Mg) --> Hydrogen (H) + Salt (MgCl) To achieve the different concentration of hydrochloric acid we used a 2 molar base concentration and then diluted it with water. For example, the 1M acid was 10ml HCl and 10ml H2O. As we were using 2M, we chose to test eight different concentrations, at 0.25 intervals as this would provide us with the necessary range of data and also, with an equal amount between each, it would make it easier for us to draw conclusions. The method that we used was: we filled up the plastic bowl with water and then also filled a measuring cylinder with water and turned it upside down with its end in the water of the bowl. It was held in place with a clamp stand. ...read more.

The measurements were correct to the closest millilitre and milligram that was feasibly possible as we used measuring cylinders and rulers that offered the highest level of accuracy. In the preliminaries, we chose the person who was most suited to continually placing the bung on and as they were able to get a feel for the speed and the reactions that were required during the introductory experiments they were able to place it on at a consistent speed. This at least improved the reliability of the experiments. The temperature of the room was out of our control so the only thing that we were able to do was try and complete the tests in one session as the temperature wouldn't have varied greatly. However, we were unable to do that so instead we continued the experiments on a day which was about the same temperature. The range of our data covered 2M, which was the most that we able to do. The values tested were: 0.25M (2.5ml HCl/17.5ml H20); 0.5M (5ml HCl/15ml H20); 0.75M (7.5ml HCl/12.5ml H20); 1M (10ml HCl/ 10ml H20); 1.25M (12.5ml HCl/7.5 ml H20); 1.5M (15ml HCl/5ml H20); 1.75M (17.5 ml HCl/ 2.5ml H20) ...read more.

As we were measuring the 15cm3 of hydrogen by eye, some of the timing may be slightly out which could affect our overall results. However as we measured all of them by eye the results are still reliable, if slightly off of the completely precise mark. All of our equipment had measurements on that were small enough for us to measure to the exact cm3. There are ways in which the method could be improved - instead of using a measuring cylinder to measure the amount of hydrogen, a gas syringe could be used. Also, we could perform the experiment in a temperature-measured room. This would help make the experiment more reliable as the temperature would remain consistent throughout the practical, thus reducing the interfering factors influence upon the results. Data There were over twenty tests conducted, three of every concentration. The amount of data that we collected was a lot and the average difference between the highest and lowest value of each concentration was 14.5 seconds. This is quite low and therefore shows that there the results are reliable as there were no anomalous results. The techniques that I used were repeated by the same people, to the same standard as was feasibly possible which makes the technique sound. Because my results were reliable, I am confident that my conclusion is reliable. ...read more.

This is a well written report. It major strength is the quality of the data. There are specific strengths and improvements are suggested throughout.