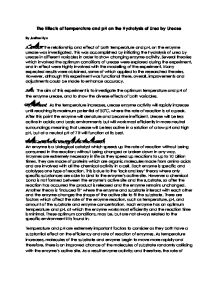 Rates of Reaction- Hydrolysis of Urea by Urease

The Effects of Temperature and pH on the Hydrolysis of Urea by Urease By Justine Hyu Abstract: The relationship and effect of both temperature and pH, on the enzyme urease was investigated. This was accomplished by initiating the hydrolysis of urea by urease in different variables in order to show changing enzyme activity. Several theories which involved the optimum conditions of urease were explored during the experiment, and in effect were highly involved with the modelling of the experiment. Many expected results were obtained, some of which applied to the researched theories. However, although this experiment was functional there, overall, improvements and adjustments could be made to enhance accuracy. Aim: The aim of this experiment is to investigate the optimum temperature and pH of the enzyme urease, and to show the diverse effects of both variables. Hypothesis: As the temperature increases, urease enzyme activity will rapidly increase until reaching its maximum potential of 50�C, where the rate of reaction is at a peak. After this point the enzyme will denature and become inefficient. Urease will be less active in acidic and basic environments but will work most efficiently in more neutral surroundings; meaning that urease will be less active in a solution of a low pH and high pH, but at a neutral pH of 7 it will function at its best. Introduction and Background Information: An enzyme is a biological catalyst which speeds up the rate of reaction without being consumed in the reaction; without being changed or broken down in any way. Enzymes are extremely necessary in life as they speed up reactions to up to 10 billion times. They are made of proteins which are organic molecules made from amino acids and are involved with all the chemical activity in a cell. Each enzyme is specific and catalyses one type of reaction. This is due to the 'lock and key' theory where only specific substances are able to bind to the enzyme's active site. ...read more.

Theory A was based on a previously conducted experiment which suggested that the optimum temperature of urease was 50�C, contrarily theory B stated that enzyme activity increased until a temperature of 71�C. Theory C established that the optimum pH of urease was approximately 7. From the gathered results which were carefully analysed, it was found that theory B and C was supported by the conducted experiment. Furthermore, an obvious relationship between enzyme activity and the temperature and pH of an environment, was demonstrated by the results and could be visually analysed on the graphs. Primarily this experiment was a success, in the perspective that it supported the plausibility of several theories; however, many improvements and adjustments could have been made to overall improve the experimental method and results. If the experiment was to be conducted again several adjustments would need to be made to improve the consistency of this experiment and to achieve more accurate results. Improvements such as using solutions with the same concentration of urea, ensuring that the test tube was not shaken or swirled to prevent interfering with the reaction, preventing heat loss from the water bath and using an electronic pH meter to test for pH. This experiment would also be more accurate if two people were working together as there would be two opinions judging the reaction. Other variables which could have also been tested are the effects of substrate and enzyme concentration, the amount of carbon dioxide produced, and the effects of certain chemicals on the rate of enzyme activity. Conclusion: In conclusion, the hypothesis was both supported and opposed by the results of the overall experiments. The hypothesis theorised that the optimum temperature of urease was 50�C; however the results of this experiment suggested that the optimum temperature was approximately 70�C. The results of this experiment implied that the optimum pH of urease is approximately 7, which supports the theory from the hypothesis. The experiment was overall successful in demonstrating the relationship and effects of variables such as temperature and pH towards an enzyme. ...read more.