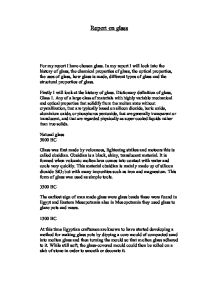 Firstly I will look at the history of glass. Dictionary definition of glass, Glass 1. Any of a large class of materials with highly variable mechanical and optical properties that solidify from the molten state without crystallization, that are typically based on silicon dioxide, boric oxide, aluminium oxide, or phosphorus pentoxide, that are generally transparent or translucent, and that are regarded physically as super cooled liquids rather than true solids.

Glass was first made by volcanoes, lightening strikes and meteors this is called obsidian. Obsidian is a black, shiny, translucent material. It is formed when volcanic molten lava comes into contact with water and cools very quickly. This material obsidian is mainly made up of silicon dioxide SiO2 but with many impurities such as iron and magnesium. This form of glass was used as simple tools.

The earliest sign of man made glass were glass beads these were found in Egypt and Eastern Mesopotamia also in Mesopotamia they used glass to glaze pots and vases.

Glazing remained but it was a great luxury up to the late middle Ages with royal palaces and churches the most likely buildings to have glass windows. Stained glass windows reached their peak as the Middle Ages drew to a close with an increasing number of public buildings inns and the homes of the rich fitted with clear or coloured glass.

The English glassmaker George Ravenscroft discovered lead crystal he then patented his new glass in 1674. He had been commissioned to find a substitute for the Venetian crystal produced in Murano and based on pure quartz sand and potash. By using higher proportions of lead oxide instead of potash, he succeeded in producing a brilliant glass with a high refractive index that was very well suited for deep cutting and engraving.

In 1688 France invented a new way of producing glass sheets which would be used for mirrors. The molten glass was poured onto a special table and rolled out flat. After its cooled down the plate glass was ground on large round tables by rotating cast iron discs and increasingly fine abrasive sands, and then polished using felt disks.

Glasses have three characteristics that make them resemble frozen liquids than rather than crystalline solids. First there is no order. Second, there are empty places. Finally glasses don't contain planes of atoms.

The simplest way to understand the difference between a glass and a crystalline solid is to look at the structure of glass at the atomic scale. By rapidly condensing metal atoms from the gas phase, or by rapidly quenching a molten metal, it is possible to produce glassy metals that have the structure shown in the figure below 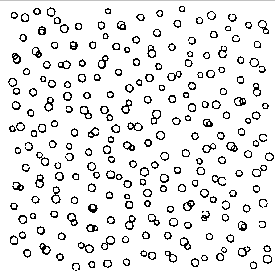 The structure of a glassy metal on the atomic scale.

The amorphous structure of glass makes it brittle. Because glass doesn't contain planes of atoms that can slip past each other, there is no way to relieve stress. Excessive stress therefore forms a crack that starts at a point where there is a surface flaw. Particles on the surface of the crack become separated. The stress that formed the crack is now borne by particles that have fewer neighbors over which the stress can be distributed. As the crack grows, the intensity of the stress at its tip increases. This allows more bonds to break, and the crack widens until the glass breaks. Thus, if you want to cut a piece of glass, start by scoring the glass with a file to produce a scratch along which it will break when stressed.