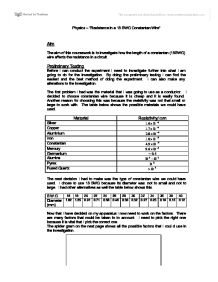 resistance of a wire

The aim of this coursework is to investigate how the length of a constantan (18SWG) wire affects the resistance in a circuit.

The first problem I had was the material that I was going to use as a conductor.  I decided to choose constantan wire because it is cheap and it is easily found.  Another reason for choosing this was because the resistivity was not that small or large to work with.  The table below shows the possible materials we could have used.

The next decision I had to make was the type of constantan wire we could have used.  I chose to use 18 SWG because its diameter was not to small and not to large.  I had other alternatives as well the table below shows this.

Now that I have decided on my apparatus I now need to work on the factors.

The main purpose of the experiment is to see how the differentiation in the length of the constantan wire affects the resistance in the circuit.  I will use the same wire throughout the experiment but I will connect the crocodile clips at different lengths.

The first length that I am going to use is 10cm of Constantan wire.  I will record the results in a table and then I will increase the length of the wire by 10cm.

On its own theses results are not that accurate, so we do the experiment another 2 times.  During these 2 further experiments I will use the same method that I have mentioned on the page above.  With the 3 sets of results that I obtained I can then take the average.

If I was to do the investigation again I would make some minor changes to the experiment.

I could have looked at another factor that affects resistance for example the thickness of the wire.  I believe that this experiment would be much harder but the results will be better.

I could have decreased the voltage that I used.  I could have compared the results of a lower voltage to that of a higher voltage.  By doing this the readings become smaller and less varied.

Instead of using constantan as the conductor I could have used another material like copper.  I can then analyse both sets of results and I can say which of the 2 materials has the higher resistance.

The constantan wire that we used was very bent and this could have caused infringements in the results.  I do not know how I can solve this problem.

I could have also used a different type of wire gauge e.g. 21 SWG.  This then would give me a different set of results I can then compare the results to that of the 18 SWG wire.

I think that I have worked hard and I enjoyed this investigation.  The prediction that I made before the experiment was correct and I collected enough evidence to back my statement.  I think that I have achieved good results but I feel as if there is stillroom for improvement.

The author does answer the question, and includes many valid points in their answer, but needs to ensure they write down equations accurately (see R= ÃÂL/A) and explain scientific concepts clearly (see explanation of resistance). The writer should explain why ...

The author does answer the question, and includes many valid points in their answer, but needs to ensure they write down equations accurately (see R= ÃÂL/A) and explain scientific concepts clearly (see explanation of resistance). The writer should explain why the resistivity of constantan is neither too small nor too large; is it easily measurable with the equipment available? They should also explain why they chose the diameter they did. This does not need to be a complicated explanation; that it made the wire easy to see, or stopped it from snapping etc would all be suitable explanations. The author might have found that one of their problems, the wire being bent, would have been easier to solve had they used a thinner wire. When describing possible causes of errors such as Ã¢â‚¬Å“the wire being bentÃ¢â‚¬Â the author should explain why this might cause an error, as this shows you understand the science. In this case, a suitable explanation would be Ã¢â‚¬Å“Being unable to straighten the wire may be a cause of error in my results as the length of wire may really be longer than that I measured, so the resistance will be higher than that predicted.Ã¢â‚¬Â A possible improvement would be to cut the wire longer than required and marking the lengths on with permanent marker. This would ensure an accurate measurement of length. When cutting the wire, keeping it taut between two clamps would ensure the author cut the correct length. When talking about improvement always mention Ã¢â‚¬Å“doing more repeatsÃ¢â‚¬Â, as this is an easy way to tick boxes on the mark scheme, especially when you explain that this improves the reliability of the experiment by reducing the effect of outliers and experiment errors and showing repeatability.

The authorÃ¢â‚¬â„¢s explanation of the science behind resistance was good, but could have been more detailed. For example, the author does not explain that metals are made up of positive metal ions (which are large) and free electrons (which are small). When explaining resistance, they talk about electrons hitting other electrons, a useful point. However, they also talk about electrons hitting Ã¢â‚¬Å“the wire itselfÃ¢â‚¬Â which is rather vague, so the examiner cannot give you marks for this. A better explanation would have been Ã¢â‚¬Å“the electrons hit the large positive ionsÃ¢â‚¬Â and explaining how this deflects them, so they donÃ¢â‚¬â„¢t move as much, so the current is smaller. A really positive aspect of their work is how they have checked their experimental results with those that the equation for resistivity predicts. However, the formula they provide for this appears to be wrong (although this may be the formatting when it was uploaded. The formula they provide is R = ÃÂ^(L/A), while the actual equation is R= (ÃÂL)/A. The author should also explain the meaning of ÃÂ; it is a value of resistivity that is specific to that metal. (While resistance is a property of the object and changes with the length and cross-sectional area, resistivity is a property of the material and accounts for length and area.) Talking about resistivity shows the author has read beyond the syllabus.

The author mentions that they did the experiment in a group of four boys, so a point worth noting is that generally it is better to write your experiment up as though you have completed it individually, even if you completed it in groups. Additionally, grammar errors such as using Ã¢â‚¬Å“toÃ¢â‚¬Â instead of Ã¢â‚¬Å“tooÃ¢â‚¬Â make the work appear lower quality and give a bad impression. I assume that graphs were included in the final piece handed in, make sure these are accurate and include error bars if you can. The points you mark should be small (less than a little box on the graph paper). At my school we were given to understand that hand drawn graphs got better marks than those drawn by computer. One final point: if you donÃ¢â‚¬â„¢t KNOW it, donÃ¢â‚¬â„¢t put it in, or better still keep looking until you are SURE any science you put in is correct. If itÃ¢â‚¬â„¢s beyond the syllabus youÃ¢â‚¬â„¢ll gain marks for putting it in, but wrong science loses you marks.