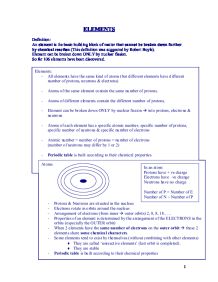 Revision notes on elements, the periodic table and compounds.

Common properties of mixtures: 1. No chemical reaction takes place during the formation of a mixture * Thus little or no energy is involved (no heat/light exchange) * Eg: Air is a mixture of oxygen, nitrogen, carbondioxide, water vapour and noble gases (without any chemical reactions) 2. Mixture has the properties of the of the constituent substances * Air has the properties all its constituents (eg: helps to burn, because oxygen is present) 3. Constituents of the mixture can be mixed in any proportion by mass * Eg: the proportion (by mass) of the different gases in air is not constant --> changes with time & place 4. A mixture can be separated into its components by physical means * Some physical methods of separation are - evaporation, filtration, Distillation, crystallization, chromatography * Eg: components of different gases of air can be separated using the technique 'fractional distillation' COMPARISON Compound Mixture 1 Chemically combined Not chemically combined - just mixed 2 Different properties from its components Components retain their individual properties 3 Components combine in a fixed proportion by mass Don't have a fixed proportion 4 Components can be separated or decomposed by chemical means By physical means 5 Heat or light is produced or absorbed during formation of the compound Not 6 Can be formed by a reaction: ? combustion ? element = element ? element + compound ? compound + compound Can be formed of any combination of solids, liquids or gases = formed by physical combination 1 ...read more.

The revision note content is to a very high standard. The candidate responds to the basic chemical concepts clearly and these would be a good aid for anyone just learning chemistry.

The revision note content is to a very high standard. The candidate responds to the basic chemical concepts clearly and these would be a good aid for anyone just learning chemistry.

The information contained in the revision notes are very basic but explain each topic very well. These would be very good notes indeed for anyone wanting to learn basic chemistry. The candidate covers a whole range of topics which encompasses good techniques and conveys this concisely and clearly.

Punctuation, grammar and spelling are all to a high standard. Layout is great with a good sized easy to read text and clear subheadings.