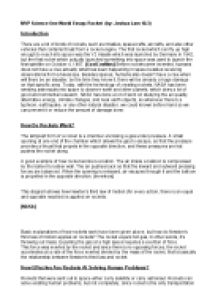 Rocket Essay. How Do Rockets Work?

There are a lot of kinds of rockets, such as missiles, spacecrafts, aircrafts, and also other vehicles that contains thrust from a rocket engine. The first rocket which can fly up high enough to reach into space was the V2 missile which was launched by Germany in 1942, but the first rocket which actually launched something into space was used to launch the first satellite on October 4, 1957. [CoolCosMos] Before rockets were invented, humans does not have a clue actually what has been happening in space besides receiving observations from a telescope. Besides spaces, humans also doesn’t have a clue when will there be an disaster, by the time they know it, there will be already a huge damage on that specific area. Today, with the technology of creating rockets, NASA has been sending astronauts into space to observe earth and other planets, which does a lot of good environmental research, NASA has done a lot of work on studying the air quality,

Rockets that were sent out to space either carry satellite or carry astronaut. Rockets can solve existing human problems, but not completely, since rocket is the only transportation  on earth that can reach space, the “things” that were carried out to space by rockets are really important and are really effective at solving human problems. One of the “thing” that rockets carry out to space is satellite. Manmade satellites are used for communications between different parts of earth, and GPS signals. Did you ever think why can you talk to your friends or family through a phone even you’re miles and miles apart? The reason why you can do that is because of the satellite, so whenever there’s an emergency, you can use your phone to call for help. NASA had announced that they are inventing space shuttles, so in the future, space traveling would be possible.

This is a photo of a rocket carrying a satellite blasts off in Russia.

There are a lot

Inventors (a website about inventions, how they were made and what’s the theory behind the invention)

NASA (official website of the national aeronautics and space administration)

Techlusion (a website that is created by students from university of Pakistan; National University of Sciences and Technology)