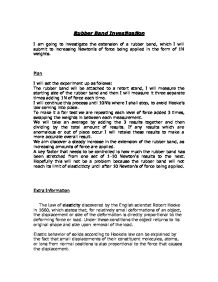 Rubber Band Investigation I am going to investigate the extension of a rubber band, which I will submit to increasing Newton's of force being applied in the form of 1N weights. Plan I will set the experiment up as follows: The rubber band will be attached to a retort stand, I will measure the starting size of the rubber band and then I will measure it three separate times adding 1N of force each time. I will continue this process until 10N's where I shall stop, to avoid Hooke's law coming into place. To make it a fair test we are repeating each level of force added 3 times, swapping the weights in between each measurement. We will take an average by adding the 3 results together and then dividing by the total amount of results. If any results which are anomalous or out of place occur I will retake these results to make a more accurate overall result. We aim discover a steady increase in the extension of the rubber band, as increasing amounts of force are applied. A key factor that needs to be controlled is how much the rubber band has been stretched from one set of 1-10 Newton's results to the next. ...read more.

* * Hooke's Law says that the stretch of a spring is directly proportional to the applied force. say "Stress is In symbols, F = kx, where F is the force, x is the stretch, and k is a constant of proportionality. If Hooke's Law is correct, then, the graph of force versus stretch will be a straight line. I will start with the zero end of the ruler even with the bottom of the rubber band when the spring scale is hanging on the rubber band. This will allow the change in length of the rubber band to be easily determined. Apparatus I will use: 1 retort stand 3 rubber bands 10*1 Newton weights Ruler My input variable is force in Newton's applied and my output variable is extension of rubber band. Prediction I predict that after 10 N of force has been applied to the rubber band it will reach its elastic limit and then it will start to follow Hooke's law, where the amount the rubber band is stretched out of shape past its original size. I also predict that the greater the weight applied to the band, the further the band will stretch. This is because extension is proportional to load and so if load increases so does extension and so stretching distance. ...read more.

To analyse these results with my scientific knowledge I would have to say the increase in length of rubber band is directly proportional to the increase in force applied so stretching distance also increases. We did alter are plan slightly because we had extra time at the end we tested the limit of elasticity to try to prove or disprove Hooke's law. By analyzing my graphs with my scientific knowledge I can work out that the more force applied to the band, the greater the extension, that is why both my graph get gradually taller instead of ascending if you wanted to produce an ascending graph you could start off with 10 Newton's of force applied and keep taking more weights off to lower the extension. From my double rubber band experiment you can clearly see there is less extension throughout because with two bands they can share the force applied thus with two bands there is a higher elastic limit then with just one rubber abnd. Overall I am pleased with the outcome of this Investigation I believe that I have proved Hooke's law to be correct and that after the limit of elasticity the rubber band is permanently put out of shape. ...read more.