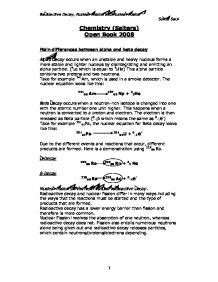 Chemistry (Salters) Open Book 2008 Main differences between alpha and beta decay Alpha decay occurs when an unstable and heavy nucleus forms a more stable and lighter nucleus by disintegrating and emitting an alpha particle. (42? which is equal to 42He) This alpha particle contains two protons and two neutrons. Take for example 241Am, which is used in a smoke detector. The nuclear equation looks like this: 24195 Am 23793 Np + 42He Beta decay occurs when a neutron-rich isotope is changed into one with the atomic number one unit higher. This happens when a neutron is converted to a proton and electron. The electron is then released as Beta particle (0-1� which means the same as 0-1e-) Take for example 23191Pa, the nuclear equation for Beta decay looks like this: 23191Pa 23192U + 0-1e- Due to the different events and reactions that occur, different products are formed. Here is a demonstration using 22588 Ra. ?-Decay 22588 Ra 22086 Rn + 42 He �-Decay 22588 Ra 22589 Ac + 0-1e- Nuclear fission differs from natural radioactive decay. Radioactive decay and nuclear fission differ in many ways including the ways that the reactions must be started and the type of products that are formed. ...read more.

When lithium forms in stars it can take one of two routes: 1. 4He + 3H --> 7Li 2. 4He + 3He --> 7Be... ... ...7Be + electron --> 7Li In the 2nd route shows that the collision between the atom and an electron causes a change to the nucleus of the atom. The proton number and the structure of the nucleus is changed. Lithium could then be produced by the action of cosmic rays on carbon, oxygen and nitrogen. Lithium can be synthesised in exploding stars and even heavier elements can be created. Main characteristics of fission and fusion Fission Fission uses the equation E=mc2 (E = energy, m = mass and c = velocity of light) Nuclear fission is likened to the oscillation of a drop of liquid. If there are violent vibrations, the droplet will split in two. If an atom is given enough energy, through the absorption of a neutron, the atom becomes excited and begins to oscillate. The nucleus then splits into two nuclei of medium mass whilst emitting three neutrons. These neutrons may start a chain reaction by causing further fission in other nuclei. ...read more.

But the sun's gases exist as a plasma. There are advantages and disadvantages of using fission and fusion for generating electricity. The fuels needed for fusion are isotopes of hydrogen. They are in abundant supply. Which can offer longevity. This is a definite advantage as burning fossil fuels generates 80% of the world's energy, which brings on climate change and produces pollution. In addition to this, the radioactivity of the structure is shorter compared to a nuclear fission power station. Fission can produce actinides (highly radioactive waste) which can take thousands of years to decay. It is a lot safer as well. The fusion reaction cannot get out of control as only small amounts of fuel is used. Challenges Facing Scientists If fusion reactions could be controlled on earth, the possibilities would be endless. The energy has the likelihood of being used to generate electricity. But scientists have the problem of safely producing reactions. Fusion reactions require constant high temperatures. Scientists have to combat the fact that at normal temperatures on Earth, the repellent force between the two nuclei would be too huge for fusion to occur. Higher temperatures are needed to overcome this force, as the nuclei are moving a lot faster and with more energy for the collisions that the force barrier is overcome. ...read more.