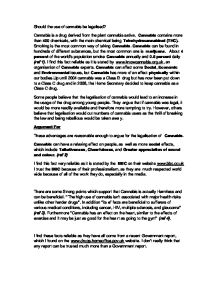 Science in the news- should cannabis be legal?

Should the use of cannabis be legalised? Cannabis is a drug derived from the plant cannabis sativa. Cannabis contains more than 400 chemicals, with the main chemical being Tetrahydrocannabinol (THC). Smoking is the most common way of taking Cannabis. Cannabis can be found in hundreds of different substances, but the most common one is marijuana. About 4 percent of the world's population smoke Cannabis annually and 0.6 percent daily (ref 1). I find this fact reliable as it is stated by www.knowcannabis.org.uk, an organisation of Cannabis experts. Cannabis can affect some Social, Economic and Environmental issues, but Cannabis has more of an effect physically within our bodies.Up until 2004 cannabis was a Class B drug but has now been put down to a Class C drug and in 2006, the Home Secretary decided to keep cannabis as a Class C drug. Some people believe that the legalisation of cannabis would lead to an increase in the usage of the drug among young people. They argue that if cannabis was legal, it would be more readily available and therefore more tempting to try. However, others believe that legalisation would cut numbers of cannabis users as the thrill of breaking the law and being rebellious would be taken away. ...read more.

Why is Cannabis illegal when it may cause less Negative effects than Alcohol which is a legal drug? Many Cannabis smokers ask these questions, as 'The World Health Organisation's' latest report claims that Cannabis is safer than Tobacco and Alcohol. Dr Roger Pert wee from WHO claims that Cannabis is ''not as addictive as people think it is''. He supports his statement by claiming that ''90% of those who had tried the drug had since quit, compared to the 9% who could manage to quit smoking Tobacco'' He also claims that ''There is very little evidence that cannabis is harmful in the long term, just as Alcohol is'' (ref 6). I find this information very reliable as it comes from the World Health Organisation which is one the top organisations in the world which dedicates its work to get accurate health information and data world wide. From all of the Data that I have collected, I see a pattern of an agreement from each source as they each compare Cannabis to other drugs in order to prove or convince that Cannabis is not as bad as people think. All the data that I have collected correspond with each other as they are all on the same line of identifying the positives of Cannabis, and comparing it to the negatives of legal drugs. ...read more.

Would you make it legal or illegal? I would make it legal. If there is a drug, that is stated by a very trusted source such as the BBC, as having the ability to give you Relaxation. Would you make it legal or illegal? I would make it legal. On the other hand the data which I have collected which is against the legalisation of Cannabis all seem weak and unconvincing instead. ''Cannabis may be a gateway drug to more harmful substances like heroin and cocaine'' (ref 3)Although this statement comes from a very reliable source such as the BBC, it is a very weak point and is Unconvincing as the word 'may' implies the possibility of the information being wrong. This is also consistent with the point that I am making. Finally, after collecting all of the data that I have in this report, I have also come to a conclusion that alcohol has more negative aspects then Cannabis. I believe that it is safe to say that anyone who drinks alcohol is more of a criminal than a Cannabis smoker, and yet Cannabis is illegal and Alcohol is not. So if Alcohol becomes illegal then I would accept Cannabis as being Illegal, but as Alcohol is legal at the moment then I have no other choice but to think that Cannabis should be legalised. ...read more.

****
The main arguments for and against the legalisation of cannabis are covered. However, the space given to each is not balanced. Good evaluations of information source reliability.