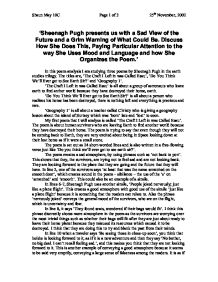 'Sheenagh Pugh presents us with a Sad View of the Future and a Grim Warning of What Could Be. Discuss How She Does This, Paying Particular Attention to the way She Uses Mood and Language and how She Organizes the Poem.'

‘Sheenagh Pugh presents us with a Sad View of the Future and a Grim Warning of What Could Be. Discuss How She Does This, Paying Particular Attention to the way She Uses Mood and Language and how She Organizes the Poem.’

In this poem analysis I am studying three poems by Sheenagh Pugh in the earth studies trilogy. The titles are, ‘The Craft I Left in was Called Esau’, ‘Do You Think We’ll Ever get to See Earth Sir?’ and ‘Geography 1’.

‘The Craft I Left in was Called Esau’ is all about a group of astronauts who leave earth to find anther world because they have destroyed their home, earth.

‘Do You Think We’ll Ever get to See Earth Sir?’ is all about a person who realizes his home has been destroyed, there is nothing left and everything is precious and rare.

‘Geography 1’ is all about a teacher called Christy who is giving a geography lesson about the island of Surtsey which was ‘born’ late and ‘lost’ to soon.

My first poem that I will analyse is called ‘The Craft I Left in was Called Esau’. The poem is about human survivors who are leaving Earth to find another world because they have destroyed their home.

The next poem that I am going to analyse is called ‘Do You Think We’ll Ever get to See Earth Sir?’, and is the second in the earth series. It is  all about a person who came from earth but destroyed it, and now cannot live there. The poem starts with in a very sad atmosphere, the poem is very sad and pessimistic, an example of this is ‘you won’t see what it was; what it could be.’, from line 7.  The poem is set out in a free-flowing verse, consisting of 28 lines. In the title, ‘Sir’ is a common courtesy, with a child asking Christy (the teacher) if a school trip would be possible. This would be a polite way to talk to the teacher, and the question mark after ‘Sir’ refers to the person being asked a question. This means that the poem is probably the answer, a long and descriptive reply to a common question from these pupils that he is teaching. From lines 1-9, he is talking about Earth as it is now, ‘you can’t land, because they’re still toxic’ (from line 5), implying that the land has been exposed to dangerous chemicals, war or long-term misuse, whereas in and from line 10 he changes his tone, explaining what earth was from his memory and not what earth is now.

In all three poems, Sheenagh Pugh is trying to say that if we continue to destroy the world, we could kill it. We would have to find another planet to live on, where there are no ‘toxic’ spills, and we would have to find a planet that is suitable for us all. Sheenagh Pugh uses a range of literal devices and is very good when putting them into contrast with the poem. I think that in her fist poem ‘The Craft I Left in was Called Esau’ that she was very good at creating atmosphere and tension. In the other two poems, she was great at describing images.

I agree with her that we are careless with resources and that someone will have to come up with an answer soon. The second poem ‘Do You Think We’ll Ever get to See Earth Sir?’ was my favourite poem as it had lots of description.

This is a well written report that demonstrates a good understanding of some key tools.
1. The use of examples is good.
2. The identification of tools is good.
3. There could be a more in depth analysis of why particular tools have been used.
****