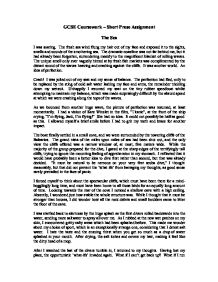 GCSE Coursework - Short Prose Assignment The Sea I was soaring. The fresh sea wind flung my hair out of my face and exposed it to the sights, smells and sounds of the smothering sea. The dramatic coastline was not far behind me, but it had already been forgotten, surrendering meekly to the magnificent blanket of rolling waves. The unique smell only ever vaguely hinted at by fresh fish markets was complimented by the distant sound of the waves heaving and crashing against the cliffs. It was another world. An idea of perfection. Crash! I was jolted out of my seat and my sense of balance. The perfection had fled, only to be replaced by the sting of cold salt water lashing my face and arms, the remainder trickling down my wetsuit. Unhappily I resumed my seat on the tiny rubber speedboat whilst attempting to maintain my balance, which was made surprisingly difficult by the absurd speed at which we were crashing along the tops of the waves. ...read more.

I reflected that it would have probably been a better idea to dive first rather than second, but that was already decided. "It must be natural to be nervous on your very first scuba dive," I thought reasonably, but that did not prevent the 'what ifs' from barraging my thoughts, as good sense rarely prevailed in the face of panic. I forced myself to think about the spectacular cliffs, which must have been there for a mind-bogglingly long time, and must have been home to all those birds for an equally long amount of time. Looking towards the rear of the cove I noticed a shallow cave with a high ceiling. Absently, I wondered just how stable the whole structure was. While I thought that it must be stronger than houses, I did wonder how all the rock debris and small boulders came to litter the floor of the cave. ...read more.

I glanced over at the other person in the boat, a Spanish woman who was diving at the same time as me. Of course, she appeared calm, composed and relaxed, laying back enjoying the sun, showing absolutely no signs of any nervousness that could reassure me. Minutes later, the woman's companion, another novice diver, surfaced prematurely, as if she thought that I was not worried enough. This gave the 'what-ifs' a chance to surface a third time. Maybe scuba diving was not such a great idea after all. After I learned that the other woman had 'only' panicked, I decided to go through with it telling myself that all I had to do was not panic, and trust the instructor knew what he was doing. "No problem," I lied to myself. Soon I was being weighed down by a belt of lead weights and an impossibly heavy tank of air, and sitting on the edge of the boat. Taking a last few nervous gulps of air, I leaned back... ...read more.