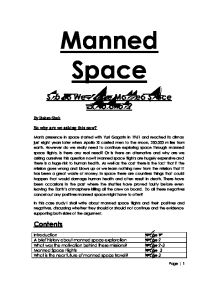 Should We Persue Manned Space Flights?

Should We Pursue Manned Space Exploration?

So why are we asking this now?

Man's presence in space started with Yuri Gagarin in 1961 and reached its climax just eight years later when Apollo XI carried men to the moon, 250,000 miles from earth. However do we really need to continue exploring space through manned space flights, is there any real need? Or is there an alternative and why are we asking ourselves this question now? Manned space flights are hugely expensive and there is a huge risk to human health. As well as the cost there is the fact that if the mission goes wrong and blows up or we learn nothing new from the mission that it has been a great waste of money. In space there are countless things that could happen that would damage human health and often result in death. There have been occasions in the past where the shuttles have proved faulty before even leaving the Earth’s atmosphere killing all the crew on board. Do all these negatives cancel out any positives manned space might have to offer?

In this case study I shall write about manned space flights and their positives and negatives, discussing whether they should or should not continue and the evidence supporting both sides of the argument.

For the near future manned space travel has been confirmed to other planets such as Mars and also our moon. Now that space travel is getting cheaper and easier with rapidly advancing technologies, a new sector has emerged in manned space travel, tourism. Richard Branson’s Virgin Galactic is already set to launch tourists into sub-orbital space. Customers would go to training camp before the flight into space ant then experience a short amount of time in space experiencing zero gravity and a view of the Earth from space. Branson’s space cruiser has already been tested and been given the go ahead. Although for the time being it is only affordable for the wealthy the technology as always is getting cheaper and tourist space travel could be the normal for many of us in the not too distant future. This can only mean that if in no other form manned space travel will live on in the tourism industry with Richard Branson leading the war. (BBC Focus article, issue# 170) The reliability of this article is full as work and money has already started on the project and a working model of the galactic tour ship has been successfully tested on a number of occasions. It is almost definite that space tourism will continue to cause a spark in people’s minds so there is little doubt space tourism will stop anytime soon after it starts. 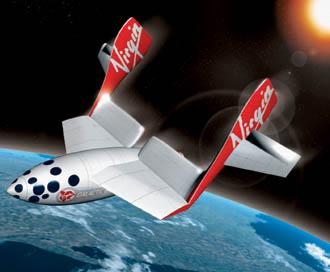 Is there an alternative to manned space exploration?

Some people think very much so, each shuttle launch costs around $1.3bn, but the most important exploration today is carried out by unmanned craft, costing far less per individual mission.

In my opinion I think that manned space exploration should continue. With more money being spent and procedures being better organised so we can reduce the chance of human life loss.

Most of the information I used I obtained from the internet by conducting research. I also used an article from a BBC Focus magazine.