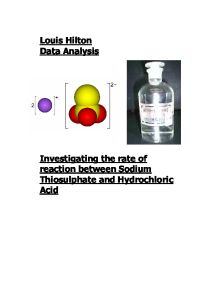 Evaluation The procedure I used and evidence I collected was sufficient to draw a valid conclusion as there were no anomalous results. If I were to repeat the procedure again I could improve it by using data loggers to measure the light intensity instead of time and set it to take readings every second for each concentration although this kind equipment was unavailable. From this a better picture of individual reactions could be built and this would also eliminate some of the faults in the experiment which most likely would have occurred through human error for instance the reading of results and the timing using a stop watch. A much better analysis could also be achieved and individual rates calculated from the gradients of the graphs produced. ...read more.

readings between those I have already obtained, for instance increasing the concentration of sodium thiosulphate by 10% rather than 20%, to increase the accuracy of my graph and data analysis. I would also do sufficient repeats until an approximate number came out as the most frequently occurring and an average then taken from this although time was a slightly limiting factor in this investigation but I feel that my results were efficient. Graph A - This graph shows the relationship between the concentration of Na2S2O3 (Sodium Thiosulphate) and The Average time (from three results) for the solution to turn cloudy. The higher the concentration the quicker the reaction took place, there is a negative correlation between time and the percentage of Sodium Thiosulphate. My graph shows this. ...read more.