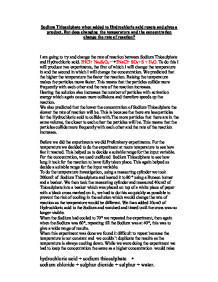 Sodium Thiosulphate when added to Hydrochloric acid reacts and gives a product, But does changing the temperature and the concentration change the rate of reaction

Sodium Thiosulphate when added to Hydrochloric acid reacts and gives a product, But does changing the temperature and the concentration change the rate of reaction? I am going to try and change the rate of reaction between Sodium Thiosulphate and Hydrochloric acid. 2HCl+ Na2S2O3 2NaCl+ SO2+ S + H2O. To do this I will produce two experiments, the first of which I will change the temperature in and the second in which I will change the concentration. We predicted that the higher the temperature the faster the reaction. Raising the temperature makes the particles move faster. This means that the particles collide more frequently with each other and the rate of the reaction increases. Heating the solution also increases the number of particles with activation energy which again causes more collisions and therefore speeds up the reaction. We also predicted that the lower the concentration of Sodium Thiosulphate the slower the rate of reaction will be. This is because the there are less particles for the Hydrochloric acid to collide with.The more particles that there are in the same volume, the closer to each other the particles will be. ...read more.

We than added 10cm3 of Hydrochloric acid to the Sodium and watched and timed until the cross was no longer visible. When the Sodium had cooled to 70? we repeated the experiment, then again when the Sodium was 60?, repeating till the Sodium was at 40?, this was to give a wide range of results. When this experiment was done we found it difficult to repeat because the temperature is not constant and we couldn't duplicate the results as the temperature is always cooling down. While we were doing the experiment we had to keep the concentration the same as a higher concentration would raise the change of more collisions. We then plotted the results on a graph. We then moved on to the concentration experiment. To do this we took 30cm2 of Sodium Thiosulphate using a measuring cylinder and placed it in a beaker on top of another piece of paper marked with a cross. We then measured 10cm2 of water to dilute it. We then added 10cm2 of Hydrochloric acid and timed how long it took for the cross to disappear. ...read more.

To solve this we could have used a water bath which is preset to a certain temperature. We also had troubles with the concentration experiment as when we did the first experiment the room temperature was 22? and the day after when we wanted to do a repeat, the room temperature had dropped to around 17?. This could also be solved by using a water bath. Another flaw in the experiments was the person watching the cross disappear. We had to use the same person each time as everyone's eyesight differs. The only trouble with using a persons eyesight is their concentration level. This may change throughout the investigation. This is where the use of a photocell would come in. a photocell would be much more precise than the human eye. The final results of our experiments show us that our first predictions were right, the higher the temperature or concentration, the faster the rate of the reaction. This is down to the particle theory, and activation energy. ?? ?? ?? ?? hydrochloric acid + sodium thiosulphate sodium chloride + sulphur dioxide + sulphur + water. ...read more.