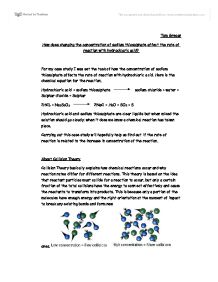 Tom Gregan How does changing the concentration of sodium thiosulphate affect the rate of reaction with hydrochloric acid? For my case study I was set the task of how the concentration of sodium thiosulphate affects the rate of reaction with hydrochloric acid. Here is the chemical equation for the reaction, Hydrochloric acid + sodium thiosulphate sodium chloride + water + Sulphur dioxide + Sulphur 2HCL + Na2S2O3 2NaCl + H2O + SO2 + S Hydrochloric acid and sodium thiosulphate are clear liquids but when mixed the solution should go cloudy; when it does we know a chemical reaction has taken place. Carrying out this case study will hopefully help us find out if the rate of reaction is related to the increase in concentration of the reaction. About Collision Theory Collision Theory basically explains how chemical reactions occur and why reaction rates differ for different reactions. This theory is based on the idea that reactant particles must collide for a reaction to occur, but only a certain fraction of the total collisions have the energy to connect effectively and cause the reactants to transform into products. This is because only a portion of the molecules have enough energy and the right orientation at the moment of impact to break any existing bonds and form new ones. ...read more.