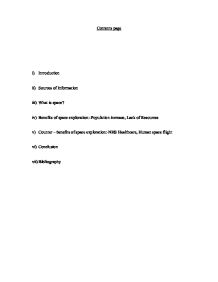 Space - Should the costing be spent?

I have chosen to write a report entitled, “Space – Can the expense be justified?”. I chose this as I had a keen interest in the matter; once we had discussed this as a class. Another reason in which why I have selected this topic is because as the world of media is advancing, this subject has been under debate for many years now, but with no final conclusion. Humans are said to have landed on the moon in 1969, however again through media many accusations have been made against this. This proves media manipulates decisions made; therefore the public should be more aware of the situation.

For this assignment, my main source of information will be the BBC news archive, due to the fact this is a government based company. Therefore the information will be very much factual and reliable, rather than opinion based data from other sources of media. Further on, I will use the British National Space Centre (BNSC) as this is Britain’s main space exploration organisation. Following on, I will be using “Encarta Encyclopedia” which is a screen-based archive of various facts and figures including extended explanations of various topics. This proves

Since history has been written, our population has grown rapidly with 6.5 billion people today.  It is said that the world’s population has quadrupled in the last one hundred years. If the population carries on dramatically increasing we will have many problems including housing issues, for the number of people. By the year 2050, from predictions, it shows that there will be eventually ten billion people living on Earth, this is a growth around 75 million people per year. [5] 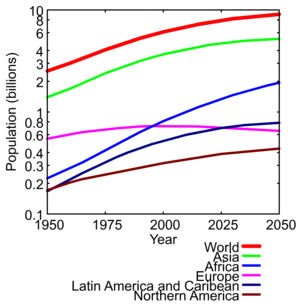 The graph on the left shows the predicted population grown for the next 50 years, as well as the “population boom” which has occurred earlier. The key shows different areas of the world and the population increase there. Asia seems to be increasing the most; this clearly is a developing region of the world. On the other hand a developed region such as Northern America seems to have a steady increase.

For this issue to be rectified, space exploration can be extremely helpful. If we can locate a suitable area beyond the Earth then we can “Colonize”. We have determined that many materials can be available in space, however human space flight advancements and engineering is vital for this to occur.  The moon seems to be a viable location for us to “Colonize”, due to the fact, it is extremely close to us compared to other planets therefore easy to transport goods and supplies.

It is also debateable that why isn’t the UK investing in human space flight, even though the UK holds the world’s fourth largest economy however they have no presence in manned space flight, or any interest in such activities. On the other hand they have invested largely into unmanned space flight, which have been a helping hand to improve the quality of life.

From this report, evidence shows that the positives unmistakably outweigh the negatives for the title “Space – Can the expense be justified?”. Personally I am supporting space exploration due to the fact I am intrigued into the question many people ask, “What is out there?” I also believe with the advancements of the modern world, during my life time I will be able to maybe benefit from space exploration in one way or another.