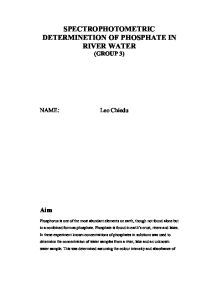 SPECTROPHOTOMETRIC DETERMINETION OF PHOSPHATE IN RIVER WATER (GROUP 3) NAME: Leo Chiedu Aim Phosphorus is one of the most abundant elements on earth, though not found alone but in a combined form as phosphate. Phosphate is found in earth's crust, rivers and lakes. In these experiment known concentrations of phosphates in solutions was used to determine the concentration of water samples from a river, lake and an unknown water sample. This was determined assuming the colour intensity and absorbance of each solution using a spectrophotometer, the experiment aims at familiarising each group with a typical spectrophotometer analysis. The experiment also aims at comparing the river water value and set guidelines by the European Union. The error associated with the class values and spectrophotometer determination of values, was achieved using, rank correlation, regression and ANOVA one - way to the check the mean values, standard deviation and 95%confidence intervals. INTRODUCTION Nature has provided human being a source of natural occurring elements and compounds. Phosphorus is the eleventh most abundant element on earth and exists in four allotropic forms; red, white (or yellow), black (or violet). When pure phosphorus is colourless and transparent. Phosphorus is insoluble in water, although, elemental phosphorus is extremely reactive and will combine with oxygen (O2) when exposed to air, the eleventh most abundant element is not found in air but rather mostly in earth's crust in a combined state as phosphates (or orthophosphate). Rock phosphates are found in earth's crust at commercial deposits in China, South Africa, Morocco, United State of America, Finland and Russia. ''The known reserves of current exploitable rock phosphate are estimated at about 40 billion tons'' (www.nhm.ac.uk/mineralogy/phos). ...read more.

The standard deviation of all groups are almost equal, the spread from figure (6) shows that they are almost equal. There is also a 95% confidence interval that the equipment (spectrophotometer) reading was accurate, this can be attributed to the high p - value. Conclusion/recommendation The phosphate level in lake, river and unknown water samples was successfully monitored using the Pyu Unicam UV - VIS. Concentrations in the lake and unknown samples did no exceed the mandatory or guideline levels in European legislation, however, the water sample level far exceed the levels in the past 15 years, as shown in figure (1). Phosphate concentrations between 0.01mg/l - 0.1mg/l is enough to accelerate eutrophication (Peirce J.J et al... 1998). The recommended level acceptable on surface waters by European Union is between 0.22 - 0.3mg/l (Directives 2000 / 60). With the statistical and empirical values obtained, the value of the river water sample far exceed the set levels, therefore, the river water is rich in phosphate. This experiment has familiarised each group on the working of the spectrophotometer and how it can be used to determine concentrations using the Beer - Lambert's relation. This experiment shows the relationship between absorbance and concentration, from the statistical data and figures (2 & 9) there exist a relationship between absorbance and concentration. Recommendation * Further studies should be carried out on the river water sample so as to inform the appropriate authorities. * Ion chromatography can be used instead of spectrophotometer because it does not depend on light absorption and colour intensity. * The Pyu Unicam UV - VIS SP 8390 should be upgraded with a newer version. ...read more.