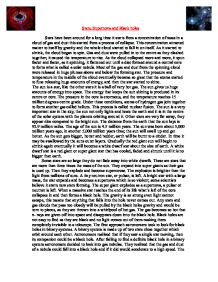 Stars, Supernova and Black holes Stars have been around for a long time it starts from a concentration of mass in a cloud of gas and dust this started from a process of collapse. This concentration attracted matter to itself by gravity and the whole cloud started to fall in on itself. As it started to shrink, the cloud began to spin. Gas and dust were pulled in to the centre as they clashed together; it caused the temperature to rise. As the cloud collapsed more and more, it spun faster and faster, as it spinning, it flattened out until a disc formed around a central core to form what is called a solar nebula. Most of the gas and dust from the spinning cloud were released in huge plumes above and below the forming star. The pressure and temperature in the middle of the cloud eventually became so great that the atoms started to fuse releasing huge amounts of energy, and then the star started to shine. ...read more.

The age of the sun is 4.5 million years. The sun was born about 5,000 million years ago, in another 5,000 million years time; the sun will swell up and get hotter. As the sun gets bigger, hotter and redder, earth will be burnt to a cinder. In time it may be swallowed by the suns outer layers. Gradually the red giant sun will begin to shrink again eventually it will become a white dwarf star about the size of earth. A white dwarf star is a red giant or super giant star that has cooled, faded and shrunk until it is no bigger than earth. Some stars are so large they do not fade away into white dwarfs. These are stars that are more than three times the mass of the sun. They expand into super giants as their gas is used up. Then they explode and become supernovae. The explosion is brighter than the light from millions of suns. ...read more.

The first approach astronomers took to look for black holes in binary systems. A binary system is made up of two stars close together which orbit around each other. Astronomers realized that if they saw a single star moving, then its companion could be a black hole. After failing to find a definite black hole in a binary system astronomers decided to look into gas nebulae. They realized that the gas and dust of a nebula could fall into a black hole and if it did would accelerate to a high speed. The mystery surrounding black holes to find any real evidence for them is still continuing. But it is not conclusive proof as nobody has been in a black hole to check it. And nobody will ever because apart from being killed, the person would not be able to send information back to earth because the radio signals would not escape from the hole. So we have to rely on the theories about black holes. ...read more.

This is, overall a competent piece of scientific writing. While there is some information missing and a few grammatical/spelling errors, there are alot of very relevant and important facts.

The writer has explained the formation of the stars well and the stages in stars of different sizes.

The tone of the writing becomes a little informal towards the end, but does not really detract from the quality of the piece.

The writer has a well written report, and was able to explain the processes mentioned in the question to a high standard. It was good that the writer used the introduction to explain the general outline of the essay and ...

It was good that the writer was able to mention the process of nuclear fusion and why it's so important to keep the life of the star going. It was also interesting that the writer mentioned what would happen to the earth once our own sun what is a star dies. the writers explanation of a supernovae and a black hole was of a high standard. However, some of the language that the writer uses towards the end of the essay becomes slightly informal, for example "And nobody will ever because apart from being killed, the person would not be able to send information back to earth because the radio signals would not escape from the hole." Apart from this, this is a very well written essay.

The level of scientific language used is of a very high standard. The writer was able to explain each process very well, making each point clear and precise. If the writer wanted to go into much more detail and go beyond the GCSE syllabus, they could have mentioned the "hertzsprung-russell diagram". This is a very informative piece.

Spelling is of a good standard. The writer has made points clear but at times they could have made sure that grammar was checked over. Also, the writer should have avoided starting sentences with "And". The work flows very well and the structure makes it easy to follow.