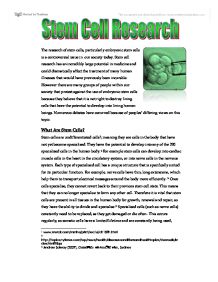 The research of stem cells, particularly embryonic stem cells is a controversial issue in our society today. Stem cell research has an incredibly large potential in medicine and could dramatically affect the treatment of many human illnesses that would have previously been incurable. However there are many groups of people within our society that protest against the use of embryonic stem cells because they believe that it is not right to destroy living cells that have the potential to develop into living human beings. Numerous debates have occurred because of peoples' differing views on this topic. What Are Stem Cells? Stem cells are undifferentiated cells1; meaning they are cells in the body that have not yet become specialised. They have the potential to develop into any of the 220 specialised cells in the human body.2 For example stem cells can develop into cardiac muscle cells in the heart in the circulatory system, or into nerve cells in the nervous system. Each type of specialised cell has a unique structure that is specifically suited for its particular function. For example, nerve cells have thin, long extensions, which help them to transport electrical messages around the body more efficiently. 3 Once cells specialise, they cannot revert back to their previous stem cell state. This means that they can no longer specialise to form any other cell. Therefore it is vital that stem cells are present in all tissues in the human body for growth, renewal and repair, as they have the ability to divide and specialise.3 Specialised cells (such as nerve cells) constantly need to be replaced, as they get damaged or die often. This occurs regularly, as somatic cells have a limited lifetime and are constantly being used, leaving them prone to damage. For example, muscle cells are regularly contracting, and are often worn and damaged because of this. This means that stem cells are responsible for the replacement of damaged or dead cells in the human body, providing a constant supply of specialised cells in order to keep the human body functioning regularly. ...read more.

Because more money is being invested, scientists are able to have all the necessary equipment and facilities to carry out their research, hence they can maximise the quality of their research. Overall, this will lead to significant knowledge being found out about iPS cells, meaning that they are more likely to fulfil their medical potential. The main disadvantage of the use of induced pluripotent stem cells is the unknown properties that they could have. Because DNA is randomly inserted into the host cells genome by a "retrovirus", certain characteristics could be expressed that are unwanted in these stem cells. For example, when iPS cells were initially discovered, one of the genes transfected by the "retrovirus" (known as c-MYC) was shown to produce cancers and tumours.30 This therefore made iPS cells unusable for human therapy, until this gene was eliminated in later techniques. There is still the potential that there are more genes transfected into the host cell that are undesirable. Hence, it is vital that research on iPS cells continues, to isolate and eliminate the undesirable genes, so that eventually, iPS cells can be used in human therapies. All properties of these cells must be thoroughly checked to ensure that they are suitable for human use, and if they aren't, they must be altered until they are, so that they can be used to treat patients. Another complication that arises with iPS cells is their shorter life span.31 This occurs because the cells that they are derived from (e.g. skin cells) are usually relatively old. The shorter life span of these iPS cells can be explained by the shortening of the telomeres as a somatic cell gets older.32 As shown on the diagram below, a telomere is the region of repetitive DNA that is found at the end of a chromosome, which helps to prevent the chromosome from deteriorating.27 After each successive cell division, the telomeres at the end of every chromosome shorten slightly, because of a problem that occurs during DNA replication (caused ...read more.

Evaluation The majority of the sources that I have used to provide information have been reasonably valid. This is because the information that I gained on these sites has been based on scientific fact. These sites have all been quite high profile; one is a resource from the "National Institutes of Health", one is from the University of Utah and the other 2 are world famous websites ("Wikipedia" and "New Scientist") The "National Institute of Health" site also ends in ".govt", meaning it is a government run site, thus it must provide factual, reviewed information. They are all informative scientific sites that would be reviewed by other people, for possible bias or incorrect information. Also, being reviewed by other people means that the chances of the sites having incorrect and biased information are greatly reduced. All information in most of these sites (especially Wikipedia) is referenced fully, to prove to the readers that the facts used are not fictitious and are accurate. Therefore, these sites are mainly unbiased on this issue and come from trustworthy and factual sites; thus the information gained from them is valid. However, Wikipedia can be edited by anyone, so for a very short period of time, it can be unreliable. However it is constantly reviewed and any incorrect information will not be on the website for too long. Therefore, to ensure the information that I have used is valid, I have double checked all information used from Wikipedia by checking the reference websites at the bottom of the page. I then cross referenced all information that I had used with the reference sites, to ensure that all information that was reported on Wikipedia was true. By checking more than one site, I have greatly increased the likelihood that the information I have used is valid and factual. Also, the site that I sourced the picture of the" medical potentials of stem cells" from was far less valid. It was merely a "blog" website that contained lots of biased comments that supported stem cell research. ...read more.