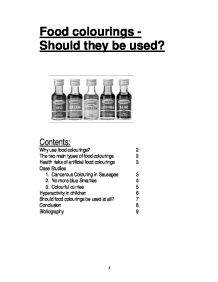 Due to the new healthy eating craze and media coverage on things such as obesity and food colourings smarties took it as an opportunity to make their colourings natural, also as tests showed that the artificial colourings in smarties were making children hyperactive. With this new idea they could no longer have blue smarties as there is no natural alternative to the blue colouring. Case study 3- colourful curries Curries in surrey have been found to have dangerous levels of food colouring in them, people have been adding the colours to them to make them more vivid colours especially chicken tikka masala. The colourings have been linked to migraines hyperactivity and allergies. The survey in surrey showed that 58 out of 102 curries they sampled contained dangerous amounts of food colourings. One restaurant was using 4 times the amount of the legal limits of the colouring in their curries. The two colourings being used are sunset yellow and tartrazine, scientists believe that tartrazine can cause blurry vision, purple skin patches and is particularly dangerous for people with asthma or with allergies to aspirin high levels of this was contained in the curries and the consumers were unaware what they were eating. ...read more.

Conclusion In conclusion to this I think that artificial food colourings should be substituted by natural ones in as many cases as possible to make the risk ALARA ( As Low As Reasonably Achievable). There is not a benefit that is big enough to take the risk of things like cancer just for the image of your food, as the world is becoming more conscious to things like this I believe the market for artificial food colourings will disintegrate as it mainly used by producer to try and get as much profit as possible. It depends what you value more money or health, if our country has come to a state where money is more important than the health of our youths then I think it needs to change quickly before the effects of the food colourings and other aspects of diet today start putting the life expectancy of people in the UK down instead of growing like it previously has. ...read more.

The candidate answers the question well. They explore both the different types of food colouring as well as the pros and cons. I would like to have seen more research into the benefits as the research is slightly unbalanced to ...

The candidate clearly outlines the different type of food colouring in an easy to understand way. They also relate their uses to why the consideration of them is important. The candidate then uses numerous case studies to explain why artificial colouring can be dangerous and the steps taken to alleviate this which shows thinking of the pros and cons of each type. The candidate makes an adequate and well reasoned conclusion taking into account all the points discussed in the main body of text, although their ending statement is extreme as there is no evidence discussed that food colouring will directly affect average life expectancy.

A clear titled contents page and large text is good to see and easy to read. A good bibliography is maintained which shows a good variety of sources used, these should be linked into the relevant section in the text to improve tracking of each source. The evaluation of each source is basic. Grammar, spelling, punctuation and layout are all to a good standard.