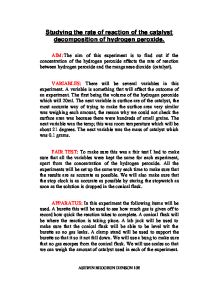 Studying the rate of reaction of the catalyst decomposition of hydrogen peroxide.

Studying the rate of reaction of the catalyst decomposition of hydrogen peroxide. AIM: The aim of this experiment is to find out if the concentration of the hydrogen peroxide affects the rate of reaction between hydrogen peroxide and the manganese dioxide (catalyst). VARIABLES: There will be several variables in this experiment. A variable is something that will affect the outcome of an experiment. The first being the volume of the hydrogen peroxide which will 20ml. The next variable is surface are of the catalyst, the most accurate way of trying to make the surface area very similar was weighing each amount, the reason why we could not check the surface area was because there were hundreds of small grains. The next variable was the temp; this was room temperature which will be about 21 degrees. The next variable was the mass of catalyst which was 0.1 grams. FAIR TEST: To make sure this was a fair test I had to make sure that all the variables were kept the same for each experiment, apart from the concentration of the hydrogen peroxide. All the experiments will be set up the same way each time to make sure that the results are as accurate as possible. ...read more.

We will then put the hydrogen peroxide in the conical flask and as quickly as possible we will put the bung on the conical flask. 6. As soon as the hydrogen peroxide has been put in the conical flask then we will start the stop clock. When 30 cm3 has been displaced then we will stop the clock. 7. Once the experiment has finished we will record the time it took on to a table, and from that we will be able to work the average time. Prediction: Using scientific knowledge I can predict several things. The first being that I believe in 0% concentration nothing will happen because the is no hydrogen peroxide to react with, therefore the hydrogen peroxide will not be able to displace the catalyst. Because I think this I am able to predict that the fastest reaction will be with 100%, I can back this up with scientific knowledge by saying that because it is a higher concentration then, there will be less molecules for the catalyst to react with causing the reaction to take place quicker because there will be more collisions. ...read more.

This is what I said in my prediction. This is because more concentrated solutions of Hydrogen peroxide have more hydrogen peroxide molecules. Because there are more molecules, more collisions occur between these and the catalyst, manganese oxide. This produces more reactions than in a lower concentration in a certain amount of time. A collision is just that, because of kinetic energy, molecules move around in liquids and gases. As the molecules move they collide. Evaluation: I think that my experiment went very well. There were no anomalies, and there were no accidents whilst the experiment was being carried out. Like in most experiment there were several things we could have improved on. The first being the most obvious, by the time the bung has been put on the conical flask the reaction will of already started this would of meant that our recordings were not entirely accurate. But I don not know of any ideas to solving this problem. I also think that the measuring devices could be improved because the scales were not very accurate. The other in accurate part of the experiment knew when the reaction had displaced 30cm3 of air because it was difficult to read off the burette. ASHWIN BHOOBUN DENSON 10E ...read more.