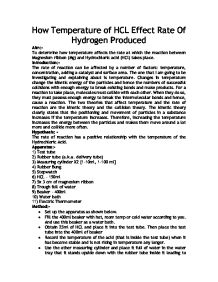 How Temperature of HCL Effect Rate Of Hydrogen Produced Aim:- To determine how temperature affects the rate at which the reaction between Magnesium ribbon (Mg) and Hydrochloric acid (HCl) takes place. Introduction:- The rate of reaction can be affected by a number of factors: temperature, concentration, adding a catalyst and surface area. The one that I am going to be investigating and explaining about is temperature. Changes in temperature change the kinetic energy of the particles and hence the numbers of successful collisions with enough energy to break existing bonds and make products. For a reaction to take place, molecules must collide with each other. When they do so, they must possess enough energy to break the intermolecular bonds and hence, cause a reaction. The two theories that affect temperature and the rate of reaction are the kinetic theory and the collision theory. The kinetic theory clearly states that the positioning and movement of particles in a substance increases if the temperature increases. ...read more.

* Use the other measuring cylinder and place it full of water in the water tray that it stands upside down with the rubber tube inside it leading to the test tube. * Place the 3cm magnesium ribbon into the test tube and at once place the bung onto the test tube * Start the stopwatch the same time when placing the magnesium ribbon into the test tube. * Then measure the amount of gas produce in 20sec * And record the temperature of the HCL again to see the change. * Repeat the experiment with different temperature of HCL. Variables:- Dependent : Reaction rate [in the form of the volume of the gas (Hydrogen) produced in 20s] Independent: Temperature of HCL Constant: * Length of magenium strip * Volume of HCl [25ml] * Concentration of HCl [0.5moles/dm3] * Apparatus * Time per reaction * Surroundings - pressure/place of exp/ surrounding temp/ etc. ...read more.

As a result of this, the reaction takes less time to occur. therefore, we can conclude that the rate of reaction DOES have a positive relationship with the temperature of the solution & my hypothesis proved correct, Evaluation: - A few errors occurred during the experiment, which could be the reason for a few inaccuracies. An unexpected problem we faced was when the amount of Hydrogen produced in 15 seconds was so great that it passed the 10 cm3 mark as the measuring cylinder was too small. Hence, we estimated the volume to be 11.6 cm3. The timing also went wrong, slightly, as the bung was not removed exactly after 20 seconds of the reaction. Another problem we faced was reading the exact volume in the 20sec as we could have misread it. After dropping the magnesium ribbon, it also took time to put the bung tightly on the test tube; this could have let some Hydrogen gas produced to escape from the test tube. Also, a few times there were tiny air bubbles already present in the measuring cylinder in the tub of water, which may have been overlooked. ...read more.

The response to the question is done very well. The candidate explains the background to the experiment well by linking scientific theory to what they think will happen in the experiment. They also provide a very well though out conclusion ...

The response to the question is done very well. The candidate explains the background to the experiment well by linking scientific theory to what they think will happen in the experiment. They also provide a very well though out conclusion and evaluation.

The hypothesis, background and aim are all explained very well and succinctly. They state which things they are going to make constant which is good because this will increase the reliability of the experiment as there are less factors which may confound the results. The method is outlined well and split into good clear stages so someone else would easily be able to repeat the experiment. The candidate includes a graph which clearly shows the trend they investigated. They could have drawn a line of best fit quite easily to show the trend better rather than just joining the points up. The evaluation and conclusion are both done to a high standard considering errors and possible improvements to the experiment.

Punctuation, grammar and spelling all done to a high level. The format and tone of the experiment are perfect.