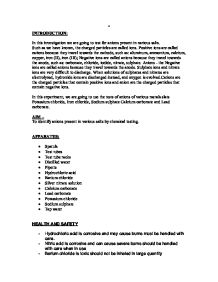 further more if any salt or test was carried out to identify the anions present , if hydrochloric acid or nitric acid were inserted into it and the solution formed bubbles/fizzed, then the negative ion present here will be carbonate. Thus the salt will then have a carbonate anion present in it. When carrying out experiments to see which negative ion is present, if the mixture fizzes when nitric acid or hydrochloric acid is inserted then you can automatically identify it has a carbonate ion present. EVALUATION In this experiment I have achieved my aim in identifying anions present in several salts. My experiment could have improved if I had followed the procedure much better. I had difficulty in this experiment in realising the reactions taking place in the test tubes I overcame this problem by focusing carefully and consulting with my partner in the reactions occurring. I have learnt that when an atom absorbs light or when an atom bonds an electron can be gained or lost and what is left is an ion. If the ion gains an electron it has become a negative ion and if it looses an ion it becomes a positive ion. This is because the balance of the electrons protons is distributed. ...read more.