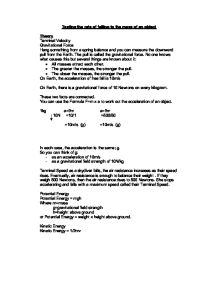 Testing the rate of falling to the mass of an object.

Testing the rate of falling to the mass of an object

Hang something from a spring balance and you can measure the downward pull from the Earth. The pull is called the gravitational force. No one knows what causes this but several things are known about it:

On Earth, the acceleration of free fall is 10m/s

On Earth, there is a gravitational force of 10 Newtons on every kilogram.

These two facts are connected.

You can use the Formula F=m x a to work out the acceleration of an object.

In each case, the acceleration is the same; g.

So you can think of g:

Terminal Speed as a skydiver falls, the air resistance increases as their speed rises.

The variable of the number is what we are testing so this will be changed accordingly.

The number of tests we will be doing is 10 as we have enough time to do this and the results will show a broader pattern. We will repeat each of the tests as well 3 times. This will range from 1 to 10 cupcakes. The range is wide spread enough to see any patterns or trends.

The accuracy of the test is ensured using the meter ruler which is fixed in order to ensure the height isn’t changed. Also the use of a stopwatch will make sure that the timing of the fall will be accurate.

We will repeat the test several times in order to make sure we have satisfactory results.

The amount of cupcakes had increased the weight of the object falling. This meant that the air resistance had to increase to balance this as it has more energy when falling. Thus it takes quicker for it to fall to the ground.

I felt the test did not go as well as we had planned. The reliability of the test became less and less as the test drew on. Towards the end, there came a point where the obtaining results became harder as the speed which it fell increased and it became harder for us to time the time it took to fall using just the resources we had. The accuracy of the test was good as when comparing with other groups who have done this test, it was found that they also shared similar results with us. The results which were taken in this test are very accurate. The three results which have been carried out are close together and close to the average, showing that this test has accurate results.

The graph came out pretty well and overall the test was efficiently carried out.