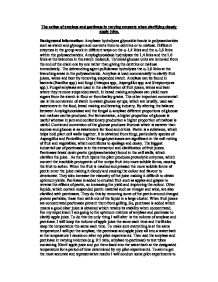 The action of amylase and pectinase in varying amounts when clarifying cloudy apple juice.

The action of amylase and pectinase in varying amounts when clarifying cloudy apple juice. Background information: Amylases hydrolyses glycosidic bonds in polysaccharides such as starch and glycogen and converts them to dextrins or to maltose. Different enzymes in the group work in different ways on the ?-1,4 links and the ?-1,6 links within the polysaccharides. Amyloglucosidase hydrolyses the 1,4 links and the 1.6 links at the branches in the starch molecule. Terminal glucose units are removed from the end of the chain one by one rather than giving the dextrins or maltose immediately. The debranching agent pullulanase hydrolyses the ?-1,6 links at the branching areas in the polysaccharide. Amylase is used commercially to clarify fruit juices, wines and beer by removing suspended starch. Amylase can be found in bacteria (Bacillus spp.) and fungi (rhizopus spp., Aspergillus spp. and Streptomyces spp.). Fungal amylases are used in the clarification of fruit juices, wines and beer where they remove suspended starch. In bread making amylases can yield more sugars from the starch in flour or from barley grains. The other important commercial use is the conversion of starch to sweet glucose syrups, which are usually, used a*s sweeteners in the food, bread making and brewing industry. By altering the balance between Amyloglucosidase and the fungal ?-amylase different proportions of glucose and maltose can be produced. For fermentation, a higher proportion of glucose is useful whereas in jam and confectionary production a higher proportion of maltose is useful. Continued conversion of the glucose produces fructose which is sweeter than sucrose and glucose is as sweeteners for food and drinks. Pectin is a substance, which helps hold plant cell walls together. It is obtained from fungi, particularly species of Aspergillus and Penicillium. Other fungal pectinases are significant in the soft rotting of fruit and vegetables, which contributes to spoilage and decay. The biggest industrial use of pectinases is in the extraction and clarification of fruit juices. ...read more.

If I spill any of it I will wash it off as soon as possible. When I put it into the beaker I will make sure the beaker is clearly labelled and I will also label the test tubes containing it. I will avoid inhaling it by being sensible around it. When handling pectinase I will wear eye protection. If I get any of it in my eyes I will wash it out. If I get any of it on my skin I will wash it off as soon as possible. I will avoid ingesting it but if I were to do so I would rinse my mouth and throat with water and drink water. If it were to catch fire I would use water or foam to put it out. As pectinase arrives in solution it is dust free. However dust can occur if it is inappropriately handled. Therefore if I spill it I will remove it immediately to avoid dust formation. I will make sure there is sufficient ventilation and wash any contaminated clothing. The safety sheet that comes with the pectinase is in the appendix at the back. Number of readings Once I have completed my pilot experiments and decided on what temperature and time interval to use I will do the experiment three times. Each time I will repeat the experiment exactly as I did the first one. I am repeating the experiment because then if I get some anomalous results I have another 2 sets to check them against. Once I have gained my results I will put them into a table like this. Experiment 1 Colorimeter reading (arbitrary units) Experiment 2 Colorimeter reading (arbitrary units) Experiment 3 Colorimeter reading (arbitrary units) 0.9-0.1 0.8-0.2 0.7-0.3 0.6-0.4 0.5-0.5 0.4-0.6 0.3-0.7 0.2-0.8 0.1-0.9 What will be measured I will be using a colorimeter to measure how much light passes through the apple juice. ...read more.

This could help to explain the anomalous results in experiment 3. For another experiment to ensure the pH was kept the same I could use a pH buffer. The enzyme amylase works best at a pH of 7.0 and the enzyme pectinase works best at a pH of 5.5. As amylase works at an optimum temperature of 95?C then using it at 35?C would mean my results would be affected by it's inactivity. So, to alter this I would have to make slight changes to a future experiment. I would suggest heating the pectinase at 35?C and the amylase at 95?C in separate water baths. Then I would add pectinase to apple juice at 35?C and leave it for 30 minutes. Then I would add amylase at 95?C to the same apple juice at 95?C and leave it for 30 minutes. I could do this using the different volumes of enzymes. For other future experiments I would use a pH buffer, to get an optimum at which they would both work I would suggest a pH buffer of 6.0. I would also stagger my experiments, for example, putting the 9:1 test tube into the water bath first and taking it out first with a time gap sufficient enough to test its clarity using the colorimeter and be able to get the next test tube out of the water bath on time. I used distilled water to set up the colorimeter, I could have gained more accurate readings if I had used pure apple juice to set it up. The problem with using distilled water is that it is already clear, I calibrated the colorimeter so that distilled water was at 0, 0 being the most clear. If I had used apple juice and set that at 10, 10 being the most cloudy the following results I had got would have had a larger difference because compared to apple juice before the experiment they had cleared. So for a following experiment I could set the colorimeter up using pure apple juice. ...read more.