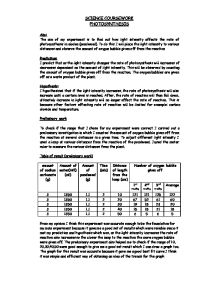 The aim of my experiment is to find out how light intensity affects the rate of photosynthesis in elodea (pondweed).

Safety: * Wear goggles through out the experiment. * Do not touch the lamp as it might be hot. * Do not touch electrical equipment with wet hands. * Do not look into the lamp while on as it might effect the eye. Range: * 10cm * 20cm * 30cm * 40cm * 50cm How the collected data was made reliable: * I used a wide range of distances - 5 * Done the experiment 3 times so its reliable * Averaged out the 3 readings THE PROCESS OF PHOTOSYNTHESIS: Photosynthesis is the chemical process change which happens in the leaves of green plants. It is the first step towards making food not just for plants, but ultimately for every animal on the planet as well. During this reaction, carbon dioxide and water are converted into glucose and oxygen. The reaction requires energy in the form of sunlight, and chlorophyll must also be present. The glucose produced in the photosynthesis reaction can be converted to sucrose and carried to other parts of the plant in phloem vessels. Glucose can also be converted into starch and stored (the starch can later be turned back into glucose and used in respiration). Oxygen is a 'waste' product of photosynthesis. Photosynthesis takes place primarily in plant leaves, and little to none occurs in stems, etc. The parts of a typical leaf include the upper and lower epidermis, the Mesophyll, the vascular bundle(s) (veins), and the stomata's. The upper and lower epidermal cells do not have chloroplasts, thus photosynthesis does not occur there. ...read more.

Evaluation In my opinion I think that this experiment was quite successful overall, since I followed the way I did my preliminary experiment as it was accurate enough to be the base of my final experiment. The method that I used was accurate enough to give me a reliable data however there were some error which affected my results such as the heat generated by the lamp. As I have earlier described, temperature has a very noticeable effect on the rate of photosynthesis, to stop this I used the screen in front of the lamp so the heat does affect the process of photosynthesis yet because the screen was quite small the heat escaped and affected the reaction. Another error was counting the bubbles; because I counted the bubbles visually I think it made the experiment unreliable therefore to make my experiment reliable and fair next time I would use a gas syringe to measure the volume of oxygen given out from the process of photosynthesis. I think that the result that I found was reliable overall because on my graph there was only one anomalous point which didn't fit the curve of best-fit this might have been because of one of the reasons from the errors which I mentioned earlier in the evaluation might have affected the result at that point Overall, I felt that due to the small volumes of oxygen involved, my experiment was not as accurate as it could have been, however I believe the result that I got from this experiment was accurate enough to support and justify my hypotheses and prediction. ...read more.