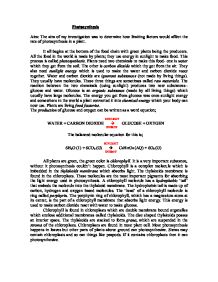 The aim of my investigation was to determine how limiting factors would affect the rate of photosynthesis in a plant.

Photosynthesis Aim: The aim of my investigation was to determine how limiting factors would affect the rate of photosynthesis in a plant. It all begins at the bottom of the food chain with green plants being the producers. All the food in the world is made by plants; they use energy in sunlight to make food. This process is called photosynthesis. Plants need two chemicals to make this food- one is water which they get from the soil. The other is carbon dioxide which thy get from the air. They also need sunlight energy which is used to make the water and carbon dioxide react together. Water and carbon dioxide are ignorant substances (not made by living things). They usually have molecules. These three things are sometimes called raw materials. The reaction between the two chemicals (using sunlight) produces two new substances- glucose and water. Glucose is an organic substance (made by all living things) which usually have large molecules. The energy you get from glucose was once sunlight energy and somewhere in the world a plant converted it into chemical energy which your body can now use. Plants are living food factories. The production of glucose and oxygen can be written as a word equation; SUNLIGHT WATER + CARBON DIOXIDE --> GLUCOSE + OXYGEN ENERGY The balanced molecular equation for this is; SUNLIGHT 6H2O (1) + 6CO2 (G) --> C6H12O6 (AQ) + 6O2 (G) ENERGY All plants are green, the green color is chlorophyll. It is a very important substance, without it photosynthesis couldn't happen. Chlorophyll is a complex molecule which is imbedded in the thylakoids membrane which absorbs light. The thylakoids membrane is found in the chloroplasts. These molecules are the most important pigments for absorbing the light energy used in photosynthesis. A chlorophyll molecule has a hydrophobic 'tail' that embeds the molecule into the thylakoid membrane. The hydrophobic tail is made up of carbon, hydrogen and oxygen based molecules. ...read more.

Plants decrease the amount of water that evaporates by keeping their stomates closed during hot, dry weather. Unfortunately, this means that once the CO2 in their leaves reaches a low level, they must stop doing photosynthesis. Even if there is a small portion of CO2 left, the enzymes used to transfer it into the Calvin cycle don't have enough CO2 to use. Grass in our gardens just turns brown and goes dormant. Some plants like crabgrass, corn, and sugar cane have a special modification to conserve water. These plants capture CO2 in a different way: they do an extra step first, before doing the Calvin cycle. These plants have a special enzyme that can work better, even at very low CO2 levels, to capture CO2 and turn it first into oxaloacetate, which contains four carbons. Thus, these plants are called C4 plants. The CO2 is then released from the oxaloacetate and put into the Calvin cycle. This is why crabgrass can stay green and keep growing when all the rest of your grass is dried up and brown. There is another strategy to cope with very hot, dry, desert weather and conserve water. Some plants (for example, cacti and pineapple) that live in extremely hot, dry areas like deserts, can only safely open their stomata's at night when the weather is cool. Thus, there is no chance for them to get the CO2 needed for the dark reaction during the daytime. At night when they can open their stomata's and take in CO2, these plants incorporate the CO2 into various organic compounds to store it. In the daytime, when the light reaction is occurring and ATP is available (but the stomata's must remain closed), they take the CO2 from these organic compounds and put it into the Calvin cycle. These plants are called CAM plants, which stands for crassulacean acid metabolism after the plant family, Crassulaceae (which includes the garden plant Sedum) ...read more.

This would have had a very marginal effect on my results as a whole, but eliminate this problem completely, it would have been necessary to perform the experiment in a totally dark room. A further inaccuracy was in the heat generated by the lamp. As I have previously described, a temperature change could seriously alter and produce inaccurate results. Furthermore as shown in the results table the temperature varied from 19�c to 23�c. The amount of oxygen produced in each try could have been inaccurate. One way that I could reduce the production errors and keep the temperature constant would be to place a Perspex block between the lamp and the elodea which would absorb most of the heat, while allowing the light energy to pass through it. Even though carbon dioxide concentration could have been an error in the experiment it is unlikely that over a short period of time the concentration would have been so low as to become the limiting factor. However if I were to perform this experiment over a longer period time the amount of CO2 will have to be measured and add sodium hydrogen carbonate to the water to increase CO2 concentration where necessary. Finally the last inaccuracy was time keeping. If we began timing just after the first bubble had been produced and in another reading it was just before, it could have had a negative effect on the accuracy of my results. Therefore on each I started just after the first bubble had been produced which increased the accuracy. Overall, I think that due to the fact that we were experimenting with small volumes of oxygen, it wasn't that accurate however enough to support and justify my hypothesis. Improvements could have been made as I have stated, but due to consequential problems related to these adjustments it was not possible. To extend this investigation into the rate of photosynthesis, I could try to involve some of the other limiting factors to the same experiment. It could also be interesting to explore the effects of colored lights on the rate of photosynthesis. ...read more.