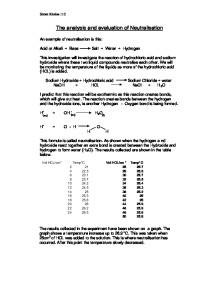 The analysis and evaluation of Neutralisation.

The analysis and evaluation of Neutralisation An example of neutralisation is this: Acid or Alkali + Base Salt + Water + Hydrogen This investigation will investigate the reaction of hydrochloric acid and sodium hydroxide where these two liquid compounds neutralise each other. We will be monitoring the temperature of the liquids as more of the hydrochloric acid (HCL) is added. Sodium Hydroxide + Hydrochloric acid Sodium Chloride + water NaOH + HCL NaCl + H2O I predict that this reaction will be exothermic as this reaction creates bonds, which will give out heat. The reaction creates bonds between the hydrogen and the hydroxide ions, ie another Hydrogen - Oxygen bond is being formed. H+ + OH - H2O H+ + O - H O H H This formula is called neutralisation. As shown when the hydrogen and hydroxide react together an extra bond is created between the Hydroxide and hydrogen to form water (H2O). The results collected are shown in the table below. We can find out the total amount of energy released in this reaction. This is done by using this equation. 4.2Joules of energy will rise the temperature of 1g of water by 1oC In my experiment there was an temperature increase of 5.1oC. ...read more.

Another way to reduce this error would to use many different conicals with set amounts in, ie one flask for every reading. This would prove impractical in the lab as there are a limited supply. I think by conducting the experiment this way a higher amount of energy will have been shown to be released. in water. H placed in water. A sodium Hydroxide molecule (NaOH) will release one Na+ and one (OH-) ion when placed in water. This means that one molecule of NaOH and one molecule of of HCl will neutralize each other and produce H20 and a neutral salt Sodium Chloride (NaCl). This means that that to neutralize HCl and NaOH at the same concentration, you need equal amounts of each. The reaction between acid and alkali is exothermic and produces heat. The heat is generated till the reaction takes place, which will occur till equal amounts of acid and alkali are mixed. On adding more acid than the equal amount of the alkali will have the effect of cooling the mixture. In this case the temperature will continue to rise for a longer period before the mixture starts to cooling. On the other hand sulphuric acid molecule (H2SO4) ...read more.

The temperature of the mixture rises as the reaction continues. Equal amounts of acid and alkali are required to form a neutral solution as both hydrochloric acid and Sodium hydroxide have equal number of (H+) ions and (OH-) ions respectively. When the solution is neutral, the reaction will cease and from that point onwards the temperature will start to decrease. The drop in temperature is caused by adding a cool acid to the hot solution. We predict the same results when hydrochloric acid is added to the control alkali, ammonium hydroxide. The equation for the reaction is as follows: HCl + NH30H ---------- H20 + NH3Cl Sulphuric Acid As sulphuric acid is added to sodium hydroxide, the pH of the alkali will decrease as the acid is gradually added to it. You need two molecules of NaOH to neutralise one molecule of H2SO4 and produce the neutral salt Sodium Sulphate Na2SO4. If the same concentration of sulphuric acid is added to twice the volume of sodium hydroxide, the resulting solution is found to have a pH of 7 as the alkali has been neutralized and a neutral solution formed. H2SO4 + 2Na0H &nbs ... To calculate the energy released we have to use the formula: Energy change = Temperature change � total volume � specific heat capacity Concentration of Acid (M) Average Temperature Change (�C) ... Simon Rhodes 11C ...read more.