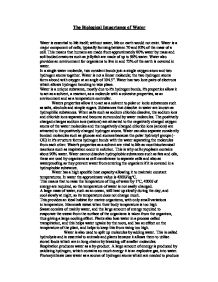 The Biological Importance of Water.

The Biological Importance of Water Water is essential to life itself; without water, life on earth would not exist. Water is a major component of cells, typically forming between 70 and 95% of the mass of a cell. This means that humans are made from approximately 80% water by mass and soft bodied creatures such as jellyfish are made of up to 96% water. Water also provides an environment for organisms to live in and 75% of the earth is covered in water. In a single water molecule, two covalent bonds join a single oxygen atom and two hydrogen atoms together. Water is not a linear molecule; the two hydrogen atoms form a bond with oxygen at an angle of 104.5o. Water has two lone pairs of electrons which allows hydrogen bonding to take place. Water is a unique substance, mostly due to it's hydrogen bonds, it's properties allow it to act as a solvent, a reactant, as a molecule with a cohesive properties, as an environment and as a temperature controller. Waters properties allow it to act as a solvent to polar or ionic substances such as salts, alcohols and simple sugars. Substances that dissolve in water are known as hydrophilic substances. When salts such as sodium chloride dissolve, the sodium ions and chloride ions separate and become surrounded by water molecules. The positively charged charges sodium ions (cations) are attracted to the negatively charged oxygen atoms of the water molecules and the negatively charged chloride ions (anions) are attracted to the positively charged hydrogen atoms. Water can also separate covalently bonded molecules such as glucose and sucrose because the polar hydroxyl groups (-OH) in it's structure forms hydrogen bonds with the water separating the molecules from each other. Water's properties as a solvent are vital to life as most biochemical reactions such as respiration occur in solution. This is why cell cytoplasm contains about 90% water. ...read more.

Water cannot dissolve hydrophobic substances such as fats and oils, these are used by organisms as cell membranes to separate cells and also as waterproofing as they prevent water from entering the organism if it is covered in a hydrophobic substance. Water has a high specific heat capacity allowing it to maintain constant temperatures. In water the approximate value is 4200J/kg�C. This means that to raise the temperature of 1kg of water by 1�C, 4200J of energy are required, so the temperature of water is not easily changed. A large mass of water, such as an ocean, will heat up slowly during the day, and cool slowly at night, so its temperature does not change much. This provides an ideal habitat for marine organisms, with only small variations in temperature. Mammals sweat when their body temperature is too high. Sweat consists of mainly water, and the large amount of energy required to evaporate the sweat from the surface of the organisms is taken from the organism, thus giving a large cooling effect. Plants also lose water in a process called transpiration, and this helps water uptake by the roots, and has an effect on the temperature of the plant, and helps to keep this from rising too high. Water is also used to split up molecules by adding water. This is called hydrolysis and is essential to animals and plants because it allows them to utilise stored foods which are in long chains by breaking off smaller molecules. Respiration produces water as a by-product. A large amount of energy is produced by oxidising hydrogen, which contains so much energy it is an explosive gas, into water. Photosynthesis uses water as a source of hydrogen atoms which are needed to produce glucose which is then stored in the plant cells as starch or used for respiration. Without water these two essential reactions would not occur and life would not be able to continue on earth. ...read more.

scale, allow life on earth to begin, since life started in the oceans with small organisms which relied on sunlight for the reaction photosynthesis to take place. As a result of water's strong hydrostatic forces water is incompressible. This provides support for soft bodied creatures such as worms, slugs and jellyfish which therefore do not require a supporting skeletal system. Water allows cells filled with water to become turgid and due to it's incompressibility plants can support themselves. Water molecules are very cohesive, sticking together because of the presence of hydrogen bonds. This cohesive property is important in the transport of materials in solution within organisms. The cohesive properties of water allows plants to pull up water through xylem vessels from the roots to the leaves, this is called the transpiration stream. It also means that the water molecules where the water meets the air will be tightly held together and the water molecules below them to form elastic film known as surface tension. Small creatures can get stuck in the surface water because they cannot break the water surface tension, creatures like water skaters can move across the surface of the water without sinking as they have a hydrophobic foot which stops them from breaking the surface tension. Bones meet at joints, and at these joints lubrication must be provided to make sure the bones do not scrape against each other causing damage, and enabling free easy movement by reducing friction. A synovial membrane at joints encloses a fluid called synovial fluid, which acts at the lubricant. Water is a major part of this fluid. Finally water also allows for insulation to happen. Waters maximum density is at 4.c as the temperature of a body of water, such as a pond drops the cooler water is at the surface and when it freezes, ice forms on the surface. This ice then insulates the water below, enabling aquatic organisms to survive. This is especially important in cold climates and where there are cold seasons. ...read more.