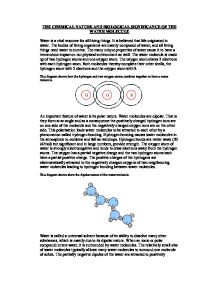 The chemical nature and biological significance of the water molecule

THE CHEMICAL NATURE AND BIOLOGICAL SIGNIFICANCE OF THE WATER MOLECULE Water is a vital resource for all living things. It is believed that life originated in water. The bodies of living organisms are mainly composed of water, and all living things need water to survive. The many unique properties of water cause it to have a tremendous impact on our physical environment as well. The water molecule is made up of two hydrogen atoms and one oxygen atom. The oxygen atom shares 2 electrons with each hydrogen atom. Both molecules thereby complete their other shells, the hydrogen atom with 2 electrons and the oxygen atom with 8. This diagram shows how the hydrogen and two oxygen atoms combine together to form a water molecule. An important feature of water is its polar nature. Water molecules are dipolar. That is they form at an angle and as a consequence the positively charged hydrogen ions are on one side of the molecule and the negatively charged oxygen ions are on the other side. This polarization leads water molecules to be attracted to each other by a phenomenon called hydrogen bonding. Hydrogen bonding causes water molecules in the atmosphere to combine and fall as raindrops. Hydrogen bonds are rather weak (20 kJ/mol) but significant and in large numbers, provide strength. The oxygen atom of water is strongly electronegative and tends to draw electrons away from the hydrogen atoms. ...read more.

This unique property of water causes the 'turnover' and mixing of nutrients and oxygen in temperate lakes and ponds. Water that is warmer or cooler than 4�C is less dense, which means that as water cools and gets closer to 4�C the molecules move closer together and take up less space. As water gets colder than 4�C, the molecules move farther apart and water becomes lighter and less dense. As ice at 0�C, water expands in volume by about 10% and is at its least dense. This causes it to be able to float. Water has extremely high surface tension. Surface tension can be defined as the force per unit length pulling perpendicularly to a line in the plane of the surface. Because of its high surface tension, water can support fairly large objects placed carefully on its surface. Surface tension is due to the cohesion of its molecules, which is intermolecular attraction between like molecules in the liquid state, relative to the adhesion of its molecules, which is the attraction between water and other molecules. Surface tension can be greatly affected by certain solutes, such as fatty acids and lipids because they may become concentrated at interfaces. These molecules usually have both polar and non-polar regions. This feature is important when water is carried through xylem up stems in plants; the strong intermolecular attractions hold the water column together, and prevent tension caused by transpiration pull. Other liquids with lower surface tension would have a higher tendency to 'rip', forming vacuum or air pockets and leaving the xylem vessel unusable. ...read more.