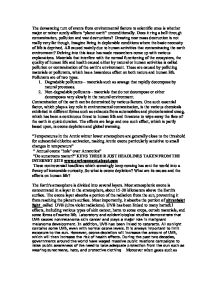 The devastating turn of events from environmental factors to scientific ones is whether major or minor surely affects &quot;planet earth&quot; unconditionally. Does it ring a bell through contamination, pollution and vast destructions?

The devastating turn of events from environmental factors to scientific ones is whether major or minor surely affects “planet earth” unconditionally. Does it ring a bell through contamination, pollution and vast destructions?  Drawing near mass destruction is not really very far though. Imagine living in deplorable conditions where the basic necessity of life is deprived. All caused mainly due to human activities that contaminating the earth environment? Delving into this issue has made researchers come up with various explanations. Materials that interfere with the normal functioning of the ecosystem, the quality of human life and health caused either by natural or human activities is called pollution or contamination of the earth’s environment. These are caused by polluting materials or pollutants, which has a hazardous effect on both nature and human life. Pollutants are of two types.

Contamination of the earth can be determined by various factors. One such essential factor, which plays a key role in environmental contamination, is the various chemicals exhibited in different forms such as exhausts from automobiles and photochemical smog, which has been a continuous threat to human life and threatens to wipe away the face of the earth in quick duration.

Moreover when gases such as chlorofluorocarbons (CFS) used as refrigerants, solvents and foam blowing agents, Halons, extremely effective fire extinguishing agents, and methyl bromide, an effective produce and soil fumigant, containing bromine are transported by winds into the stratosphere, they cause damage to the protective ozone layer. Like I mentioned above an adequate  example is the ozone hole over  Antartica .  The activation of chemicals such as chlorine and bromine leads to rapid ozone loss, which then results in the Antarctic ozone hole . Large volcanic eruptions can also have an indirect effect on ozone levels. In addition, research has shown that ozone depletion occurs over the latitudes that include North America, Europe, Asia, and much of Africa, Australia, and South America. Thus, ozone depletion is a global issue.  Reductions in ozone levels will lead to higher levels of UVB reaching the Earth's surface. The sun's output of UVB does not change; rather, less ozone means less protection, and hence more UVB reaches the Earth. Studies have shown that in the Antarctic, the amount of UVB measured at the surface can double during the annual ozone hole. Another study confirmed the relationship between reduced ozone and increased UVB levels in Canada during the past several years. However there are various measures, which have been taken up in order to try and prevent depletion of the ozone layer. A few such are as follows.
...read more.

However these gases also tend to act as atmospheric road blocks. Scientists call this road blocking ability the Global Warming Potential (GWP) of a gas. In terms of climate change power, these engineered chemicals are the most climate warming inducing. Moreover with the heavy use of fossils fuels in the 20th century , atmospheric concentrations of carbon dioxide has risen dramatically resulting in an   invariable increase in temperature  for example plants absorb the gas as they grow, trapping it until they die and decay. So reduction of forests and other agricultural practices by humans may change the absorption of carbon dioxide . Because of this global temperatures are expected to rise from 1 degree to 3.5 degree by the year 2100 . although this trend appears to be a small change , the increase  would make the earth warmer than it  has been in the last 125,000 years , possibly changing climatic patterns , affecting crop production , disrupting wildlife distribution and raising the sea level.

Our continuous ignorance about the hazards of misuse of nature’s products have brought us to this stage where  one cannot even live up to the average life span of  an individual. Although climatic change is ruled by various factors this intrinsically self indulgent world filled with the utmost complicated individuals have increased these  hazards  to such an extent that one is intoxicated  in this web of deterioration!!! Unless there’s something done to change our lifestyle , life itself will become only a statement and mankind will soon disappear too!