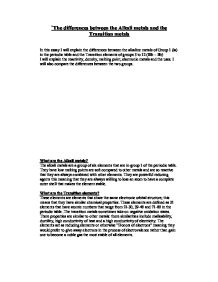 The differences between the Alkali metals and the Transition metals.

`The differences between the Alkali metals and the Transition metals In this essay I will explain the differences between the alkaline metals of Group 1 (la) in the periodic table and the Transition elements of groups 3 to 12 (lllb - llb) I will explain the reactivity, density, melting point, electronic metals and the uses. I will also compare the differences between the two groups. What are the Alkali metals? The alkali metals are a group of six elements that are in-group 1 of the periodic table. They have low melting points are soft compared to other metals and are so reactive that they are always combined with other elements. They are powerful reducing agents this meaning that they are always willing to lose an atom to have a complete outer shell that makes the element stable. What are the Transition elements? These elements are elements that share the same electronic orbital structure; this means that they have similar chemical properties. These elements are defined as 31 elements that have atomic numbers that range from 21-30, 39-48 and 71-80 in the periodic table .The transition metals sometimes take on negative oxidation states. ...read more.

An alloy is a mixture of two or more metals combined to create a new one. The metals have to be in a molten form to be mixed. Here is an example of an allow using the transition metals Zinc and Copper. Zinc and Copper can be combined to create brass. This is useful for musical instruments such as trombones and trumpets. Car tyres are also a mix of metals hence making them an alloy. (Figure 4) Alkali metals in-group 1 have lower melting and boiling points than the transition metals. They are very soft to cut, they are more reactive than the transition metals this is because the alkali metals are higher in the reactivity series than the transition metals. They all have 1 electron in their outer shell. This means for them to attain the stability of a Noble gas they have to give away an electron rather than gain 7 to have a full outer shell. This reaction would be very successful if the alkalis gave away their 1 electron in their outer shell to the "Halogens". ...read more.

Covalent bonding meaning two atoms joining together and sharing the two outermost electrons. For e.g. (Figure 6) As I have written and shown, Alkali metals can be bonded with the halogens and never try to make covalent bonds. I conclude with the information I have gained from my range of information sources that have clearly made out the main differences between the two groups. The alkali metals have melting points that are lower than the transition metals; they also have different ways of becoming stable ions and achieving the state of a noble gas. Some alkalis have to be extracted from their ores using electrolysis. The transition metals unlike the alkalis are compounds. The alkalis have 1 electron in their outermost shell that makes them unstable and very reactive. The transition metals all have 1 or 2 electrons in their outer shell apart from Palladium which has 0 electrons in the outer shell. The alkalis also are very soft to cut, they react with water some are very violent creating H2 gas and giving of coloured flames. They skim the surface meaning they have a lower density than water. There are many differences between the alkalis and transitions, I hope I have summed up most of them. ...read more.

Three stars.
A clearly structured report, that outlines some of the of the features and differences between alkali metals and transition metals.
To improve:
1)Explain some of the chemical concept in more depth and use the diagrams to support this.
2)Make more links between the general chemical properties such as reactivity to each of the metal groups and from this highlight the differences between the two.
3)Explain the practical uses for each of the groups and link this to their chemical structure.
4) Evaluate the reliability of the information sources. The most reliable sources will be original research.