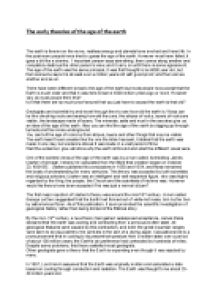 The early theories of the age of the Earth.

﻿The early theories of the age of the earth The earth is forever on the move, restless energy and planets have evolved and have life. In the past many people have tried to guess the age of the earth. However most have failed, it goes a bit like a domino, 1 important person says something, then comes along another and completely destroys the other person?s view, and it carry on until there is some agreement. The age of the earth was the same principal, it was first thought to be 6000 year old, but then someone says it is at least over a million years old with good proof, and then comes another and so on. There have been different views to the age of the earth but most people now accept that the Earth is much older and that it was formed some 4500 million years ago or more. However why do most people think this? Is it that there are so much proof around that you just have to accept the earth is that old? Geologists and scientist try and travel through time to see how old the earth is. ...read more.

Calculations led to a pronouncement that in cooling to its present temperature from a molten state over a period of about 100 million years, the Earth's circumference had contracted by hundreds of miles. Despite some problems, this theory satisfied most geologists. Other geologists gave a theory that the Earth is expanding even though it was rejected by many. In 1897, Lord Kelvin assumed that the Earth was originally molten and calculated a date based on cooling through conduction and radiation. The Earth was thought to be about 25-40 million years old. However after a few years after Kelvin?s publication, Rutherford was giving a lecture at the Royal institute about his new discovery in radioactivity was going to say his theory about the age of the earth in the end of his speech, but was worried that Levin who was one of the guests was going to disagree about his theory, but was relieved to see Levin that he was asleep. Rutherford said that the Earth must be at least 70 million years old or more. He said that the earth must be definitely over 70 million years old, which means Kelvin?s theory was completely, destroyed. ...read more.

Some people don?t view the scientific view because they are religious and believe what the bible and other religious people have said. Some believe that the earth was made in October 23, 4004 BC. That god made it in one day. Even the evidence we show people still won?t believe it. We have had many people telling what they believe and many have different theories some of which are completely the opposite but as the years went by we got a more accurate age of the Earth. From 6000 years to something like 4.6 billion years, it shows as the years go by our brain develops and we get a better conclusion, also using the ideas people had said. With money we get more/better technology which helps us with our observation and so it becomes more accurate. Not only do we just see the land and its cliffs, landscape and layers, we can see how old the earth is in the Ocean and seas. Also the new things we have found like the atoms, radioactivity, the minerals we have found around the world and fossils and many more. In the end we believe that the earth is 4.6 billion years old the facts are there and so whether you believe it or not that is the truth. ...read more.