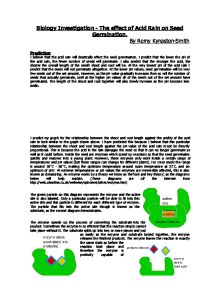 The effect of Acid Rain on Seed Germination.

Biology Investigation - The effect of Acid Rain on Seed Germination. By Remy Kynaston-Smith Prediction I believe that the acid rain will drastically effect the seed germination. I predict that the lower the pH of the acid rain, the fewer number of seeds will germinate. I also predict that the stronger the acid, the shorter the overall length of the seed's shoot and root will be. At the very lowest pH of the acid rain I predict that the seeds will not germinate altogether. At the lower pH values, seed germination will be very few seeds out of the set amount. However, as the pH value gradually increases then so will the number of seeds that actually germinate, until at the higher pH values all of the seeds out of the set amount have germinated. The length of the shoot and root together will also slowly increase as the pH becomes less acidic. I predict my graph for the relationship between the shoot and root length against the acidity of the acid rain to look similar to the graph drawn above. I have predicted this because I believe that this particular relationship between the shoot and root length against the pH value of the acid rain to not be directly proportional. This is because the acid in the rain damages the seed so that it can no longer germinate as well as it could before. Inside the seed are enzymes which speed up reactions so that the seed germinates quickly and matures into a young plant. However, these enzymes only work inside a certain range of temperatures and pH values (but these ranges can change for different plants). For cress seeds the range is around 18�C - 30�C, making the optimum temperature around room temperature at 21�C, and an optimum of pH7. At extreme temperatures or pH values the enzymes are irreversibly affected, this is also known as denaturing. ...read more.

The duration of which the seeds are left for should be the same for each dish. If a certain set of seeds are left for a lot longer then some anomalous results could appear because the certain set of seeds had been given more time to germinate and grow. The number of cress seeds should be the same in each dish. It wouldn't directly affect my final results but it will be a lot more easy and fair to compare the seeds in each dish and not a selected number of seeds. With the hundred seeds I have been given and the ten different concentrations I have chosen to test, I shall require to put ten seeds in each dish. Temperature ideally should be monitored but it will be very difficult to keep the temperature absolutely constant. Anything from a drafty door to an open window could change the temperature of the room. The temperature preferably should be kept at approximately 21�C (room temperature). Temperature is important because the enzymes inside the seed need warmth for kinetic energy. These enzymes work at an optimum temperature of around room temperature which is the temperature at which they have the most kinetic energy. When these enzymes have a lot of kinetic energy they move around more quickly, reacting with more substrates in a given time than they would if they had less kinetic energy. As a result of this the reaction takes place a lot more quickly. Safety precautions: because of the fact that acid is involved in the experiment certain safety precautions need to be taken into consideration. Safety goggles should really be worn just incase some acid is flicked somehow into your eye or if you get it on your fingers then directly rub your eyes. You will need to stand up as well because that way you won't be able to spill a strong acid on to your lap. ...read more.

If I was to carry out further work after completing this experiment to help prove and back up my prediction I could do a number of different things. I would repeat the experiment with more seeds in each Petri-dish to help give me a better average at the end. I would also test more dishes of seeds at the same concentration of the acid rain mixture, I would test about three more sets at each concentration. I would carry out the experiment using a much more concentrated acid to see if different or similar results were obtained to my first experiment. I may possibly test more different pH values than eleven so that my graph could be much more accurate. I would complete the experiment using different seeds to see if it had exactly the same affect. I would maybe use grass seeds because they do not take too long to grow. I would carry the experiment out outside in natural conditions but still keep a watchful eye over the seeds and control the conditions so that the grass seeds were not damaged in any other way, by any serious variation in conditions. By doing this I could see if it wasn't just cress seeds that were vulnerable to acidic conditions. Lastly, I would continue the experiment to see if the cress seeds that had barely germinated at the end of the two days still continued to grow, or if they simply died after a certain length of time. This would show whether or not the acid rain affected the seeds as they reached the later stages of germination or not. By carrying this out would show me whether acid rain allowed the cress to actually pass the germination process or if the acid rain just killed the cress after a certain length of time. I could also compare healthy cress to cress grown in a very dilute acid to examine if the life span of cress is also affected by acid rain. All of the above would help improve my entire prediction and conclusion and would help develop my experiment. ...read more.