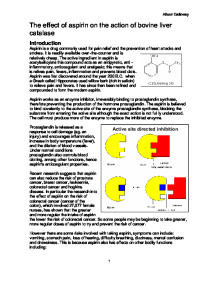 The effect of aspirin on the action of bovine liver catalase

The effect of aspirin on the action of bovine liver catalase Introduction Aspirin is a drug commonly used for pain relief and the prevention of heart attacks and strokes. It is readily available over-the-counter and is relatively cheap. The active ingredient in aspirin is acetylsalicylate this compound acts as an antipyretic, anti-inflammatory, anticoagulant and analgesic; this means that is relives pain, fevers, inflammation and prevents blood clots. Aspirin was first discovered around the year 200 B.C. when a Greek called Hippocrates used willow bark (rich in salicin) to relieve pain and fevers. It has since then been refined and compounded to form the modern aspirin. Aspirin works as an enzyme inhibitor, irreversibly binding to prostaglandin synthase, therefore preventing the production of the hormone prostaglandin. The aspirin is believed to bind covalently to the active site of the enzyme prostaglandin synthase, blocking the substrate from entering the active site although the exact action is not fully understood. The cell must produce more of the enzyme to replace the inhibited enzyme. Prostaglandin is released as a response to cell damage (eg. an injury) and encourages inflammation, increase in body temperature (fever), and the dilation of blood vessels. Under normal conditions prostaglandin also controls blood clotting, among other functions, hence aspirin's anticoagulant properties. Recent research suggests that aspirin can also reduce the risk of prostrate cancer, breast cancer, leukaemia, colorectal cancer and hogkins disease. In particular the research into the effect of aspirin on the risk of colorectal cancer (cancer of the colon), which involved 27,077 female nurses, has shown that the greater and more regular the intake of aspirin the lower the risk of colorectal cancer. So some people may be beginning to take greater, more regular doses of aspirin to try and prevent the risk of cancer. However there are some risks involved with taking aspirin, symptoms can include: vomiting, stomach pain, loss of hearing, difficulty breathing, dizziness, mental confusion and drowsiness. ...read more.

Measuring the rate of reaction: All solutions (in labelled beakers to avoid confusion) and glassware used must be kept in a 30�C water bath for this part of the experiment. (see fig. 1) i. Measure out 1ml of diluted liver solution, 2ml of pH 7.0 buffer and 2ml of aspirin solution using three separate syringes and put these into the test tube. Shake gently to ensure the solutions are mixed and leave for 10 seconds. Put the bung on the test tube ii. Measure out 1ml of the 1 mol/dm� hydrogen peroxide solution in a syringe. The hydrogen peroxide is added through the hole in the bung. The manometer must be added quickly after the hydrogen peroxide. Once the manometer bead is moving at a steady speed, because pushing the manometer into the bung causes some initial disturbance, a starting point for it's movement must be noted and the timer started, when the bubble has moved 20 mm the timer must be stopped. The time taken for the bubble to move 20mm should be recorded in a results table. iii. Repeat step 3 six times for each of the five aspirin concentrations Repeats There will be six repeats of each of the five aspirin concentrations, this will help to show whether the results are reliable or not. If the variables are controlled properly there should only be a small variation in the results. A large variation in the results shows that there is a problem with the method and that the results cannot be trusted to be accurate. Risk Assessment If all the precautions and procedures shown below are followed then the risks involved in performing this investigation are acceptable. Source of risk Safe handling Emergency Procedures Disposal Hydrogen peroxide (corrosive, harmful) o Wear goggles o Avoid skin contact o Avoid ingestion o Contact with eyes: rinse for at least ten minuets and seek immediate medical advice o Contact with skin: wash off thoroughly with water seek medical advice if skin reddens o Ingestion: ...read more.

to move then the difference made by whether it is moving or stationary as it reaches the final displacement, would be small in comparison to the overall time. Another area where error may occur is the measurements of the different solutions. Although the syringes used were very accurate, an even greater accuracy could be obtained if a larger volume of the solutions is measured out, as the larger the volume measured out is, the smaller percentage error it has. Improvements There are two main improvements that can be made to the technique of this experiment which would help to gain more accurate and conclusive results. Instead of using a manometer to measure the oxygen produced, a gas syringe would be used. A gas syringe measures up to 100ml of a gas, and has markings for every mm of displacement. The large volume of gas produced would help to even out any inconsistencies, and because the enzyme catalase is such a fast acting enzyme using it at a greater concentration means that producing large volumes of oxygen is quite realistic. The use of a gas syringe may also help to stop the inconsistencies of movement observed while using the manometer because it is designed to have very little friction in its movement. It also means that larger volumes of the catalase and hydrogen peroxide solutions can be used, as the gas syringe will be able to measure the larger volumes of oxygen produced. Use larger volumes of the solutions; this increases the accuracy of the measurements made for the volumes of solution because the error becomes smaller in comparison to the actual measure made. It also means more oxygen can be produced making the measurement for oxygen production more accurate. If larger volumes of the solutions were used in the original experiment, they bubbled up the test tube into the manometer, however, if a conical flask was used the volumes of the solutions used could be increased greatly. ?? ?? ?? ?? Alison Galloway 1 ...read more.