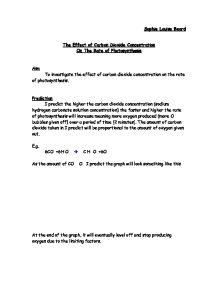 The Effect of Carbon Dioxide Concentration On The Rate of Photosynthesis.

Sophie Louise Beard The Effect of Carbon Dioxide Concentration On The Rate of Photosynthesis Aim To investigate the effect of carbon dioxide concentration on the rate of photosynthesis. Prediction I predict the higher the carbon dioxide concentration (sodium hydrogen carbonate solution concentration) the faster and higher the rate of photosynthesis will increase meaning more oxygen produced (more O bubbles given off) over a period of time [2 minutes]. The amount of carbon dioxide taken in I predict will be proportional to the amount of oxygen given out. E.g. 6CO +6H O --> C H O +6O As the amount of CO O I predict the graph will look something like this At the end of the graph, it will eventually level off and stop producing oxygen due to the limiting factors. Diagram Variables Things we could change which would effect our results are -: * Amount of light intensity * Amount of carbon dioxide(sodium hydrogen carbonate solution molar) * Different conditions (temperature) ...read more.

-The bubbles may have been coming too fast to count -The bubbles may have contained other things other than oxygen -The bubbles may and more than likely was not all the same size each time. The class results were more accurate and fair probably because they were an average of a lot more. If I would repeat this experiment again I would use a gas syringe to collect up the oxygen produced. This would measure the volume of oxygen collected over a period of time much fairer and more accurately than counting bubbles. We can't be sure the size of each bubble is the same but this would measure the volume exactly. If I was to re-do my experiment using the gas syringe it would look like this- I would follow my procedure as before but instead of me counting the gas would be collected in the syringe and I would work out the average volume collected over a period of time not the average amount of bubble over a period of time. ...read more.

****
A good plan and clear understanding of relevant theory shown. Occasionally more precise use of scientific terms would have been helpful.