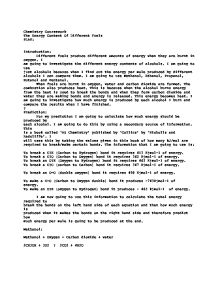 * The scales that measured the mass of the fuel in the burner were not digital and so there could have been some human error in reading them and some inaccuracy. * The time between, when we put the flame out and checked the temperature of the water and the mass of the fuel would have been different each time which meant that maybe the temperature had continued to increase by the time we measured the temperature and so was not the same temperature that it was when we stopped the experiment. There weren't any major problems, and the experiment was done safely. There were two incidents that we could prevent in the future where the water got to boiling point quickly and wasn't stopped in time apart from that everything went relatively well. If we were to do this experiment again, I think that we should use more tin foil so that we can cover also the top of the experiment because heat was being lost there. I think that we could be more careful in reading off measurements from rulers or scales. I also think that we should have definitely made sure that the distance between the clamp stand and the bottom of the boiling tube were exactly the same each time that we did it instead of being roughly the same. Next time we could measure a different variable such as seeing how long each fuel takes to heat a boiling tube of water to 100?C. This would be able to show us how quickly each fuel can produce enough energy to bring the water to boiling point. We could also use the five different fuels and have exactly the same amount of mass in each and burn them, and time which one burns up the fastest. This would also show us how quickly each fuel breaks and makes bonds. Sophia Walter U5C 15/12/2005 Chemistry Coursework Page 1 of 3 ...read more.