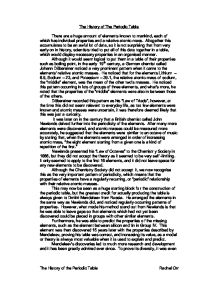 The History of The Periodic Table.

The History of The Periodic Table There are a huge amount of elements known to mankind, each of which has individual properties and a relative atomic mass. Altogether this accumulates to be an awful lot of data, so it is not surprising that from very early on in history, scientists tried to put all of this data together in a table, which would display necessary properties in an organised manner. Although it would seem logical to put them in a table of their properties such as boiling point, in the early 19th century, a German chemist called Johann D�bereiner noticed a very prominent pattern when it came to the elements' relative atomic masses. He noticed that for the elements Lithium - 6.9, Sodium - 23, and Potassium - 39.1, the relative atomic mass of sodium, the "middle" element, was the mean of the other two's masses. ...read more.

It only seemed to apply to the first 16 elements, and it did not leave space for any new elements to be discovered. Although the Chemistry Society did not accept it, we now recognise this as the very important pattern of periodicity, which means that the properties of elements have a regularly recurring, or "periodic" relationship with their relative atomic masses. This may now be seen as a huge starting block for the construction of the periodic table, but the greatest credit for actually producing the table is always given to Dmiitri Mendeleev from Russia. He arranged the elements in the same way as Newlands did, and noticed regularly occurring patterns of properties. However, what made his method stand out from Newlands is that he was able to leave gaps so that elements which had not yet been discovered could be placed in groups with other similar elements. ...read more.

Moseley's work led to a final periodic table, the one which is today accepted all over the world. However, it did not answer questions about periodic variations in chemical and physical properties. The work done to explain this was not done until much later, and was discovered to be down to the numbers and distributions of the electrons orbiting the nucleus. It was discovered that the periodic table then needed to be split into "blocks" to satisfy these variations. The blocks are dependant upon the electrons in the outer shell of the different elements. The defining characteristics of the periodic table that we know today are its vertical Groups of elements labelled I to VII and 0, and the horizontal Periods labelled 1 to 7. The "blocks" are labelled as follows; Groups I and II - s block, Groups III to VII - p block, transition metals - d block, and the lanthanide and actinide elements - f block. The History of the Periodic Table Rachel Orr ...read more.