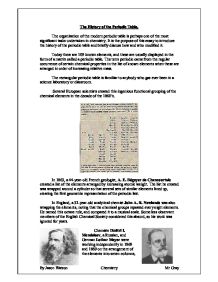 The History of the Periodic Table.

The History of the Periodic Table. The organization of the modern periodic table is perhaps one of the most significant tasks undertaken in chemistry. It is the purpose of this essay to introduce the history of the periodic table and briefly discuss how and who modified it. Today there are 109 known elements, and these are usually displayed in the form of a matrix called a periodic table. The term periodic came from the regular occurrence of certain chemical properties in the list of known elements when these are arranged in order of increasing relative mass. The rectangular periodic table is familiar to anybody who gas ever been in a science laboratory or classroom. Several European scientists created this ingenious functional grouping of the chemical elements in the decade of the 1860's. In 1863, a 44-year-old French geologist, A. E. B�guyer de Chancourtois created a list of the elements arranged by increasing atomic weight. The list he created was wrapped around a cylinder so that several sets of similar elements lined up, creating the first geometric representation of the periodic law. In England, a 32-year-old analytical chemist John A. R. Newlands was also wrapping the elements, noting that the chemical groups repeated every eight elements. He named this octave rule, and compared it to a musical scale. ...read more.

Although Mendeleev's table is nearly 130 years old, it differs a little from the charts on the walls of laboratories today. The insight obtained in that productive decade resulted in a tool that furthers understanding and eases the use of chemistry in every laboratory in the world. This periodic table above is a smaller version of the periodic table, which you may see in every laboratory that you go in to. It is the one has been changed again and again because so many people have worked hard on making it, just to make it easier for other people to use and understand. Below is a table that gives the facts about the history of the periodic table. It tells you who contributed to what part of the table and the year at what it was contributed. Contributor Date Contribution Comment Aristotle ~330 BC Four element theory: earth, air, fire & water Antoine Lavoisier ~1770-1789 Wrote the first extensive list of elements containing 33 elements. Distinguished between metals and non-metals. Some of Lavoisier's elements were later shown to be compounds and mixtures. J�ns Jakob Berzelius 1828 Developed a table of atomic weights. Introduced letters to symbolize elements. Johann D�bereiner 1829 Developed 'triads', groups of 3 elements with similar properties. Lithium, sodium & potassium formed a triad. ...read more.

Glenn Seaborg 1940 Synthesised transuranic elements (the elements after uranium in the periodic table) In 1940 uranium was bombarded with neutrons in a cyclotron to produced neptunium (Z=93). Plutonium (Z=94) was produced from uranium and deuterium. These new elements were part of a new block of the Periodic table called Actinides. The first ever elements that was found was earth, air, fire and rain by Aristotle according to this table. The latest edition of the elements to the table according to this table is the Synthesised transuranic elements by Glenn Seaborg in 1940. This table was taken from www.ausetute.com.au/pthistor.html. In conclusion there were ten really educated and determined people who put the final periodic table together, they were Aristotle, Antoine Lavoisier, J�ns Jakob Berzelius, Johann D�bereiner, John Newlands, Lothar Meyer, Dmitri Mendeleev, William Ramsay, Henry Moseley, and Glenn Seaborg. These were the main people that children and chemists recognise today as the makers of the periodic table and thank them for it as it has made it a lot easier for to know what to do with certain elements and the dangers when working with then. The main person that people today recognise with the periodic table is Dmitri Mendeleev as his part was one of the most important parts as he showed that you could predict the next element that you leave a space for, and the arrangement of the periodic table. By Jason Watson Chemistry Mr Gray ...read more.