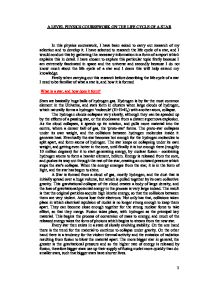 The life cycle of a star.

A LEVEL PHYSICS COURSEWORK ON THE LIFE CYCLE OF A STAR In this physics coursework, I have been asked to carry out research of my selection and to develop it. I have selected to research the life cycle of a star, and I would conduct this by gathering the necessary information in a form of a report which explains this in detail. I have chosen to explore this particular topic firstly because I am extremely fascinated in space and the universe and secondly because I do not know much about the life cycle of a star and I deem this will help extend my knowledge. Firstly when carrying out this research before describing the life cycle of a star I need to be familiar of what a star is, and how it is formed What is a star, and how does it form? Stars are basically huge b***s of hydrogen gas. Hydrogen is by far the most common element in the Universe, and stars form in clusters when large clouds of hydrogen, which naturally forms a hydrogen 'molecule' (H+H=H2) with another atom, collapse. The hydrogen clouds collapses very slowly, although they can be speeded up by the effects of a passing star, or the shockwave from a distant supernova explosion. As the cloud collapses, it speeds up its rotation, and pulls more material into the centre, where a denser ball of gas, the 'proto-star' forms. The proto-star collapses under its own weight, and the collisions between hydrogen molecules inside it generate heat. Eventually the star becomes hot enough for the hydrogen molecules to split apart, and form atoms of hydrogen. The star keeps on collapsing under its own weight, and getting even hotter in the core, until finally it is hot enough there (roughly 10 million degrees) for it to start generating energy, by nuclear fusion - combining hydrogen atoms to form a heavier element, helium. ...read more.

Our sun, for example, probably can sustain reactions for some 10 billion years. Really big stars have to conduct nuclear fusion at an enormous rate to keep in hydrostatic equilibrium and quickly falter, sometimes as fast as 40,000 years. If the star is about the same mass as the Sun, it will turn into a white dwarf star. If it is somewhat more massive, it may undergo a supernova explosion and leave behind a neutron star. But if the collapsing core of the star is very great at least three times the mass of the Sun nothing can stop the collapse. The star implodes to form an infinite gravitational warp in space, a hole. This is exemplified in a very simple diagram highlighting the consequence of each mass of the stars and what they will revolve into. Normal stars such as the Sun are hot b***s of gas millions of kilometres in diameter. The visible surfaces of stars are called the photospheres, and have temperatures ranging from a few thousand to a few tens of thousand degrees Celsius. The outermost layer of a star's atmosphere is called the "corona", which means "crown". The gas in the coronas of stars has been heated to temperatures of millions of degrees Celsius. Most radiation emitted by stellar coronas is in X-rays because of its high temperature. Studies of X-ray emission from the Sun and other stars are therefore primarily studies of the coronas of these stars. Although the X-radiation from the coronas accounts for only a fraction of a percent of the total energy radiated by the stars, stellar coronas provide us with a cosmic laboratory for finding out how hot gases are produced in nature and how magnetic fields interact with hot gases to produce flares, spectacular explosions that release as much energy as a million hydrogen bombs The Orion Trapezium as observed. The colours represent energy; where blue and white indicate very high energies and therefore extreme temperatures. ...read more.

If the neutron star is rotating rapidly, as most young neutron stars are, the strong magnetic fields combined with rapid rotation create an amazing generator that can produce electric potential differences of trillions of volts. Such voltages, which are 30 million times greater than those of lightning bolts, create deadly blizzards of high-energy particles. If a neutron star is in a close orbit around a normal companion star, it can capture matter flowing away from that star. This captured matter will form a disk around the neutron star from which it will spiral down and fall, or accrete, onto the neutron star. The in falling matter will gain an enormous amount of energy as it accelerates. Much of this energy will be radiated away at X-ray energies. The magnetic field of the neutron star can funnel the matter toward the magnetic poles, so that the energy release is concentrated in a column, or spot of hot matter. As the neutron star rotates, the hot region moves into and out of view and produces X-ray pulses. Black Holes When a star runs out of nuclear fuel, it will collapse. If the core, or central region, of the star has a mass that is greater than three Suns, no known nuclear forces can prevent the core from forming a deep gravitational damage in space called a black hole. A black hole does not have a surface in the usual sense of the word. There is simply a region, or boundary, in space around a black hole beyond which we cannot see. This boundary is called the event horizon. Anything that passes beyond the event horizon is doomed to be crushed as it descends ever deeper into the gravitational well of the black hole. No visible light, nor X-rays, nor any other form of electromagnetic radiation, or any particle, no matter how energetic, can escape. The radius of the event horizon (proportional to the mass) is very small, only 30 kilometres for a non-spinning black hole with the mass of 10 Suns. ?? ?? ?? ?? 1 ...read more.