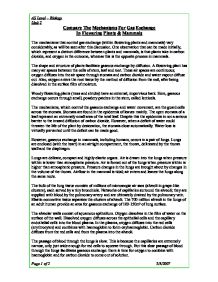 The mechanisms that control gas exchange.

The mechanisms that control gas exchange (within flowering plants and mammals) vary considerably, as will be seen after this discussion. One observation that can be made initially, which represent a distinct difference between plants and mammals, is that plants take in carbon dioxide, and oxygen is the outcome, whereas this is the opposite process in mammals. The shape and structure of plants facilitate gaseous exchange by diffusion. A flowering plant has many air spaces between the cells of stem, leaf and root. These air spaces are continuous; oxygen diffuses into the air space through stomata and carbon dioxide and water vapour diffuse out. Also, oxygen enters the root tissue by the method of diffusion from the soil, after being dissolved in the surface film of moisture. ...read more.

However, gaseous exchange in mammals, including humans, occurs in a pair of lungs. Lungs are enclosed (with the heart) in an airtight compartment, the thorax, delineated by the thorax wall and the diaphragm. Lungs are delicate, compact and highly elastic organs. Air is drawn into the lungs when pressure within is lower than atmospheric pressure. Air is forced out of the lungs when pressure within is higher than atmospheric pressure. Pressure changes in the lungs are brought about by changes in the volume of the thorax. Airflow in the mammal is tidal; air enters and leaves the lungs along the same route. The bulk of the lung tissue consists of millions of microscopic air sacs (alveoli in grape-like clusters), each served by a tiny bronchiole. ...read more.

But this slow passage of blood through the lungs facilitates gaseous exchange: there is time for oxygen to combine with haemoglobin and for carbon dioxide to come out of solution. From these synopses of the mechanisms for gas exchange in flowering plants and mammals, it is apparent that there are significant differences between the structures; one structure relies upon pressure, dissolving of oxygen in moisture and diffusion, to the other structure which controls its intake, where chemical processes will occur providing there are no limiting factors. A further observation is that both mechanisms have opposing products, which they take in and fabricate as waste products. AS Level - Biology Unit 2 Compare The Mechanisms For Gas Exchange In Flowering Plants & Mammals Page 1 of 2 5/3/2007 ...read more.