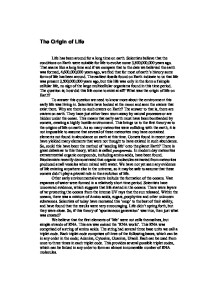 The Origin of Life

The Origin of Life

Life has been around for a long time on earth. Scientists believe that the conditions on Earth were suitable for life to evolve some 3,800,000,000 years ago. That seams like a long time and if we compare that to the date we believed the earth was formed, 4,600,000,000 years ago, we find that for most of earth’s history some form of life has been around. The earliest fossils found on Earth indicate to us that life was present 3,500,000,000 years ago, but this life was only in the form of simple cellular life, no sign of the large multicellular organisms found in this time period. The question is; how did this life come to exist at all? What was the origin of life on Earth?

To answer this question we need to know more about the environment this early life was living in. Scientists have looked at the moon and seen the craters that exist there. Why are there no such craters on Earth? The answer to that is, there are craters on earth. They have just either been worn away by natural processes or are hidden under the ocean. This means that early earth must have been bombarded by comets, creating a highly hostile environment.

Notice that RNA was the original element of life, not DNA. We believe DNA is a mutation of RNA, which then enabled more complex life forms to evolve.

RNA itself is not ‘life’, but the formation of RNA allowed for inorganic precursors to form into organic molecules. Prokaryotes were born. Simple single cellular organisms capable of self-replication due to RNA. This couldn’t happen in the modern day world, because of the oxygen rich environment. Oxygen attacks chemical bonds and we believe that the oxygen rich environment we live in today is a product of waste gases produced by prokaryotes over many millions of years. Evidence suggests that the early atmosphere comprised of water, Carbon dioxide and Nitrogen. These prokaryotes then ruled alone for 2,000,000,000 years before the evolution of DNA based life.

I have included this religious argument because it is believed in by a vast amount of people. It may not be very scientific, but it proves that science is not the only method people use to solve this question. In fact religion has been one of the greatest ever hindrances on scientific study, because religious groups were afraid of what we might find.

Have we found the answer to the question, what was the origin of life? The answer is, we don’t know, we can only theorize as to the origins of life. Perhaps one day we will be advanced enough to know for sure. But whatever it was, we’re thankful that it came to pass!