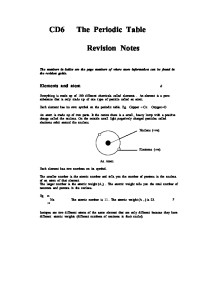 The Periodic Table - Revision Notes The numbers in italics are the page numbers of where more information can be found in the revision guide.

CD6 The Periodic Table Revision Notes The numbers in italics are the page numbers of where more information can be found in the revision guide. Elements and atom 6 Everything is made up of 100 different chemicals called elements . An element is a pure substance that is only made up of one type of particle called an atom. Each element has its own symbol on the periodic table. Eg Copper = Cu Oxygen=O An atom is made up of two parts. In the centre there is a small , heavy lump with a positive charge called the nucleus. On the outside small light ,negatively charged particles called electrons orbit around the nucleus. Nucleus (+ve) Electrons (-ve) An Atom Each element has two numbers on its symbol. The smaller number is the atomic number and tells you the number of protons in the nucleus of an atom of that element. The larger number is the atomic weight (Ar) ...read more.

The first column is called Group 1 . Elements in the same group have similar properties. There are eight groups of elements on the periodic table .(Groups 1,2,3,4,5,6,7,0) The number of the group that an element is in tells you the number of electrons that are in the outside shell of an atom of that element. Eg group 7 elements have 7 electrons in the outside shell of their atoms. 8 Group 1 59,60 The first group are called Group 1 or the alkali metals. The main elements are Li, Na, K . They are all very reactive . They must be stored under oil to stop them reacting with oxygen in the air. They have a dull outside layer which is made of oxide. They are soft and can be cut to reveal a shiny metal which quickly reacts with oxygen in the air. All of the group 1 elements react strongly with water to make hydrogen gas and an alkali solution of a hydroxide. ...read more.

Group 0 gases can be used in coloured lighting . Transition Metals 76 Transition metals do not fit into any group but they have these properties in common: 1. They are hard and shiny 2. They have high melting points 3. They are strong and dense. 4. They react with non-metals to make compounds which dissolve in water to make brightly coloured solutions. (eg Copper makes blue compounds, Iron makes orange or green compounds) Transition metal carbonates break down and make carbon dioxide gas when heated. They change colour in the process. Eg Copper carbonate heating Copper oxide + Carbon Dioxide gas (green powder) (black powder) Copper can be used to make water pipes. Iron is used as a catalyst. Solutions of transition metal ions can be identified by adding a solution of sodium hydroxide . A coloured precipitate (solid) is made. Name of transition metal ion Colour of precipitate made Copper Cu2+ Iron Fe2+ Iron Fe3+ Blue Green Orange Ions , Atoms and Molecules Any symbol that has an electrical charge on is an ion ( eg Cu2+ , Fe3+ , Cl- , O2- , I- ) Any symbo ...read more.

This is a very basic, but well explained, set of notes. It contains good, accurate information, but to a low level. Consider reading this if you are just beginning the topic for the first time.

Overall, this piece of work is 4 stars out of 5.